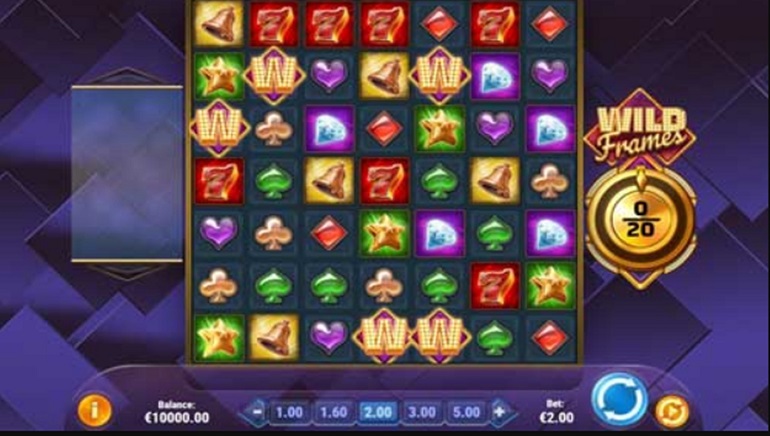 The newest slot from Play’n GO, Wild Frames, is a highly-volatile, fast-paced game that features a sleek cascading grid and a charge meter that can trigger four different features.

The newest slot from Play’n GO, Wild Frames, is a highly-volatile, fast-paced game that features a sleek cascading grid and a charge meter that can trigger 4 different features. Wilds, of course, are integral to the game, and multipliers make it possible to reach the game’s max win of 7000x your total bet.

Wins are scored when clusters of 5 or more identical symbols are formed horizontally or vertically. When a cluster forms, it disappears from the grid, making room for new symbols to cascade down and potentially form new winning clusters.

Reel symbols include four standard card suits, a golden bell, a diamond, a star, and a lucky 7. The wild is a jewel-studded W — these can be randomly added to the grid on non-winning spins to help form winning clusters.

When a wild lands on the grid, it creates a frame in the position it landed. The frame remains stuck in that position until the cascading ends. If another wild cascades onto the grid, a new frame is added. If a wild lands into an existing frame, the frame gets a multiplier added to it.

A nice touch to this slot is the charge meter that gains a charge from the number of symbols in each winning cluster. Any wilds on the grid will count individually for every cluster they are part of, which means that if one wild helps create 2 clusters, it will count as 2 charges. For every twenty charges on the meter, a special feature will be triggered that helps clear the grid.

20 charges will trigger the Transform feature, during which all high paying symbols transform into one high paying symbol. 40 charges trigger Wildcard, in which 3 to 6 wilds will be added randomly to the grid. 60 charges trigger the Shatter feature, in which all lower-paying symbols are removed from the grid, initiating a cascade. 80 charges will trigger the main feature of the game, Wild Frames. During this feature, any symbol under any frames will turn wild, and after the cascades are complete, the frames with multipliers will multiply the entire win they are part of. For every 10 extra charges over 80, 2 extra frames will be added to the grid.

Play'n GO's Wild Frames sounds more complicated than it is. While there are many different features that can be triggered, the cascades are so enthralling and take place so naturally that it’s easy to go with the flow and enjoy whatever action is thrown your way. With a max win of 7000x your bet, it’s not the highest-paying game out there, but the fast pace certainly adds a different level of excitement.