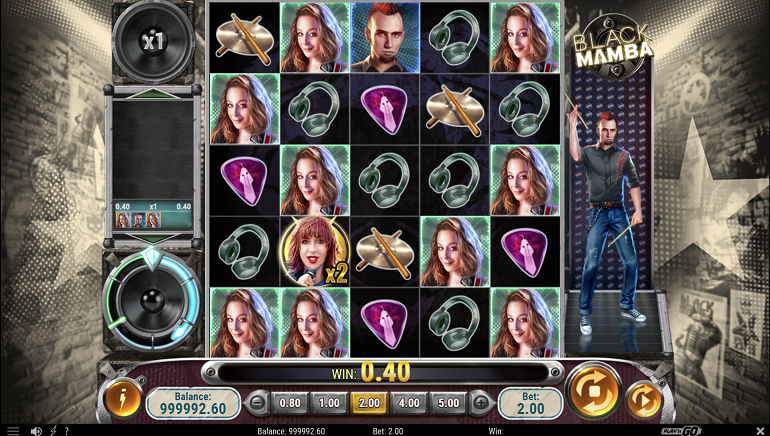 Play’n GO first entered into the development of music slots with the 2018 release of House of Doom. On that occasion, Play’n GO explored the niche genre of doom metal. This would then pave the way for the 2019 launch of Demon, a slot that was inspired by heavy metal.

Next up in the line-up is the Black Mamba slot, which is based on an Italian rock ‘n’ roll band. Microphones, headphones, drumsticks, and plectrums have been used as symbols, but the real stars are the band members themselves: Alexandra, Cecilia, and Fred, while lead singer Martina is a special wild symbol.

Play’n GO has developed Black Mamba as a video slot with five reels and five rows. Instead of rolling like a traditional slot, the symbols cascade and can disappear from the screen when three or more are matched either vertically or horizontally.

Winning symbols will then be removed and automatically filled with new ones. This cascading feature allows for players to build wins in sequences. For every win that occurs, a 1x multiplier can be added to an unlimited extent.

After winning with three band member symbols, the middle symbol then gets changed into a Martina wild symbol. If basic symbols are used instead, then this results in the Black Mamba wild appearing.

Winning with band members also serves the purpose of filling a meter that can be raised until triggering the Concert feature. This can be achieved if the meter is on four to six charges, at which point each band member performs their solo and triggers a perk.

In Black Mamba, it is also possible to clear the entire grid of symbols, with the reward being eight free spins. Whichever band member is on the screen will then repeat their solo every time a win doesn’t happen, while Martina does a solo after every single free spin.