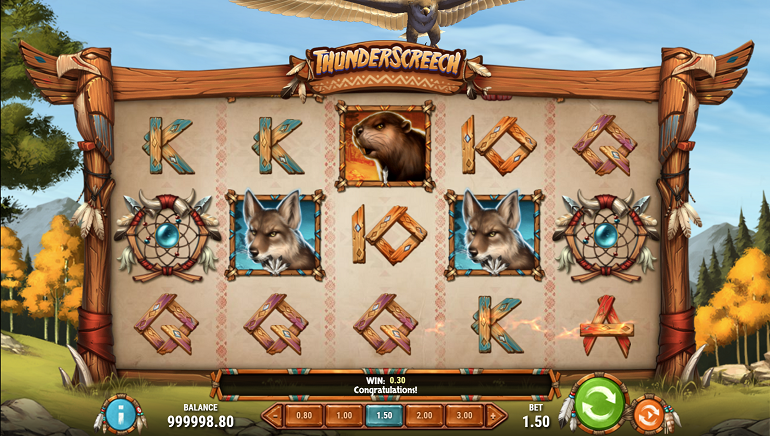 Thunder Screech from Play'n GO is one of the loveliest nature slots produced by the Swedish developer. Its features aren't too bad either. Look out for wilds, multipliers, respins, and free spins

Thunder Screech from Play’n GO is a Native American-themed slot that’s set against a backdrop of green forests and blue skies. The graphics are superb, with a majestic eagle that ushers in special features and coins that sprinkle upward like a fountain when players score a win. Features include respins, multiple wilds, multipliers, and free spins, so even though the theme is rather mellow, the gameplay is still exciting.

Symbols include 10-A royals and some rarely-seen animals in the world of slots: beavers, otters, skunks, foxes, and crows. There are also 4 wilds in this game: the standard wild and Thunder Wilds that come with x1, x2, and x3 multipliers.

During the base game, the Call feature can be triggered randomly. When this happens, the Thunderbird releases between 5 and 9 wilds onto the reels while they’re still spinning.

The Strike feature can also be randomly triggered during the base game, and here, the Thunderbird upgrades regular wild symbols to Thunder wilds while the reels are still spinning. If a Thunder symbol lands when the reels stop spinning, players win a handful of respins. Thunder wilds become sticky during the respins and start with a x1 multiplier. The multiplier increases by 1 per spin but only goes up to x3. If there is more than 1 multiplier, the values are added together.

When 3 Dreamcatcher scatters land on the reels, the Free Spins round is activated. The Thunderbird upgrades the regular wild symbols to Thunder wilds before the free spins start. At least 1 Thunder wild is guaranteed on each free spin.

Thunder Screech may sound like a slot that makes a lot of noise, but in reality, it’s a relatively calm game set against a serene backdrop. But don’t confuse serene with boring. There are plenty of features here to pique a player’s interest, including re-spins, free spins, wilds, and multipliers. The maximum win of the game is 5000x the stake per spin, which, like the game’s volatility, is not too high but not too low. It’s perfect for a low-key slot that still manages to deliver.