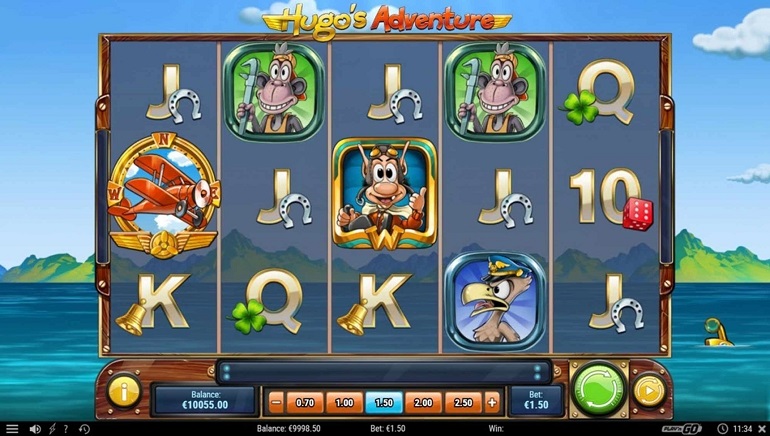 Adventure calls in the latest entry in the Hugo series from Play’n GO. Hugo’s Adventure challenges players by air and by sea to find treasure.

Hugo’s Adventure arrives as the fourth entry in a video slot series that is playable at Play’n GO casinos today. For the uninitiated, the Hugo slots feature a licensed cartoon character that was popular on Danish children’s TV in the 1990s.

Hugo’s Adventure Slot is set to follow in the footsteps of Hugo, Hugo 2, and Hugo Goal, respectively. In this outing, the diminutive troll faces his greatest challenge yet. By air and sea, he will travel on his quest to find treasure from his ultimate target, a golden submarine.

The low value symbols range from 10 to A, while the better ones are Hugo’s friends, which including Eagle, Hugolina, and Monkey. Symbols can be matched in groups of three or more over the 10 paylines of the five-reel slot.

Hugo has been assigned as the wild symbol and given the ability to substitute for every other except for the scatters. Speaking of which, these plane symbols can cause the Air Ace special feature to take off when three scatters are landed.

Should this happen, the player can receive an extra life for Hugo as well as up to 20 free spins. The feature will cause Flying Wilds to become sticky, while multipliers will also be added randomly with the ability to target wilds.

The extra lives are intended to support Hugo in trying to advance through all 20 of the spins in no piece. If he can manage that, he gets to advance to the Underwater Adventure. Alternatively, the feature can be triggered by landing two submarine scatters.

In the Underwater Adventure, the aim is for the hero to swim through the sea and dig up treasure. However, finding the wrong treasure causes the feature to end. Ultimately, the aim is to reach Skull Castle and try to drop an anchor on Don Croco and swim off with the treasure.