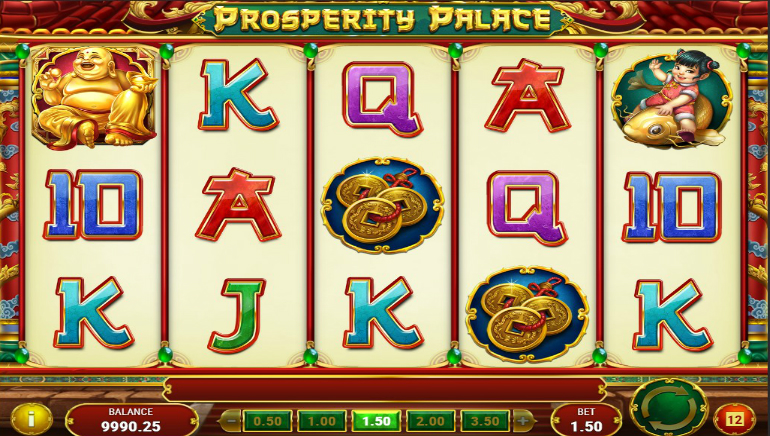 Play'n GO has released a couple of great slots in 2017 and its portfolio already includes some very popular titles. In the wake of Mermaid's Diamond’s success, the software developer hopes to set another milestone with Prosperity Palace. The game released today is rich in Asian symbols of prosperity, joy and wealth and has an unmistakable flavor of Chinese mythology. A slot of higher than average volatility, it has the potential of producing bigger payouts, for those who are bold enough to bet larger amounts.

Those who spin the reels of Prosperity Palace for the first time will be welcomed by the soothing Chinese pipe music. In this serene setting, Buddha is a larger-than-life figure looming over the reels and the symbol depicting it turns into a wild during free spins. This makes it easier for players to produce winning combinations and free spins can be retriggered indefinitely. In the absence of multipliers to boost the profits made during free spins, Play'n GO has granted Scatter symbols the ability to turn into extra Wilds.

The latest slot from Play'n GO doesn’t carry a progressive jackpot, but those who spin its reels can still win significant amounts. With a standard format of five reels and three rows, it can still produce a winning of 500 times the investment. To unlock the top payouts, one would have to line up Green Dragon symbols on a single pay line.

Players can also win a larger amount by finding the symbol depicting a young child riding a goldfish, for a profit worth 100 times the stakes. The Golden Buddha can only appear on odds reels and three of them will trigger a bundle of 10 free spins. With a high return to player ratio, Prosperity Palace also has the advantage of sporting nice graphics and immersive animations. The slot shows a lot of promise and starting today players can enjoy it at Play'n GO powered casinos.