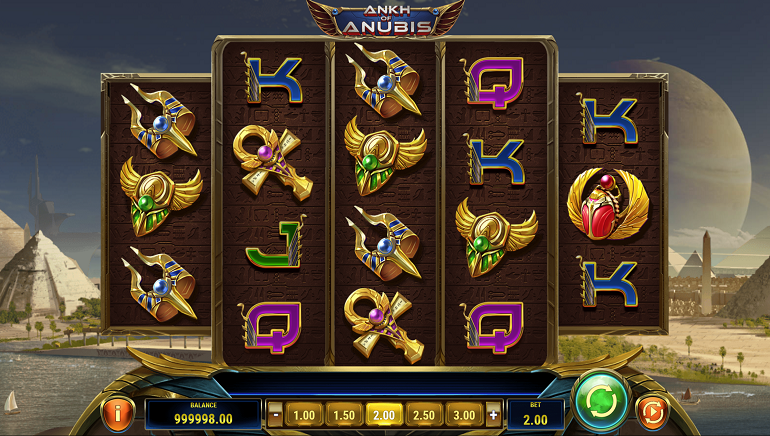 Ankh of Anubis is Play’n GO’s newest slot, and it centers around the mythological world of Ancient Egypt. In this slot, Play'n GO has outdone itself with superb graphics and captivating soundtrack.

Ankh of Anubis is Play’n GO’s newest slot, and it centers around the mythological world of Ancient Egypt. Anubis, the god of the dead, has transformed Egypt into a prosperous empire, and with his sacred Ankh he can share his wealth with the players who venture into his kingdom. In Ankh of Anubis, Play'n GO has outdone itself with its superb graphics and captivating soundtrack.

Ankh of Anubis is a diamond-shaped grid with 756 payways. It’s a high variance slot with an RTP of 96.20%. Base game wins are triggered by matching 3, 4, or 5 symbols on any of the payways. The lower-paying symbols include J, Q, K, and A royals, while the higher-paying symbols include the Ankh of Anubis, a scarab beetle, a bracelet, and amulet. There is also a pyramid scatter and an Annubis wild. The latter can trigger a random number of wilds to be placed on the reels once the spin has landed.

Players can win even more free spins by collecting 3 or more pyramid scatters during the Free Spins feature. Free spins can be retriggered indefinitely.

Adventure Around Every Pyramid

Play’n GO has produced something unique in the Ankh of Anubis, from its pyramid shape to the unlimited retriggers of free spins. Players who enjoy themes of ancient times will be enthralled by the slot’s overall appearance and golden symbols.