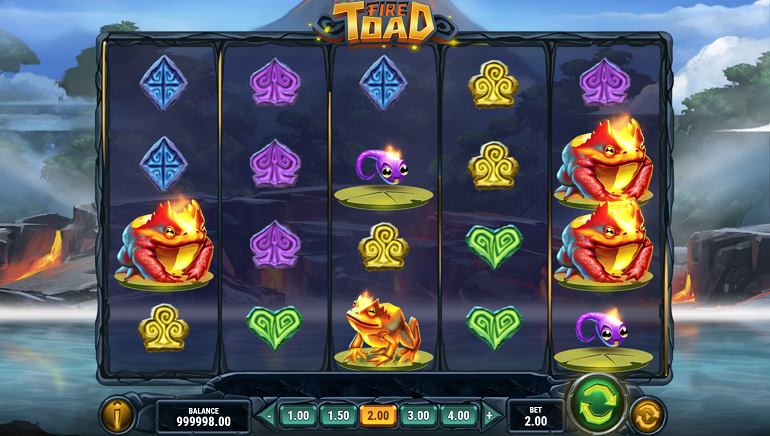 Have you ever seen a Fire Toad? Most likely not, as the closest thing to that may be frog's legs cooked under fire. Well, Play'n Go, one of the most innovative gaming studios in the industry has brought the mythical Fire Toad to life, at least to online casinos running Play'n Go software.

This game is based in Hawaii, a place where fiery volcano eruptions are part of life. Lava burns its way all over the islands of Hawaii and slithers its way into the ocean, which is exactly where the Fire Toad is conceived. If you are able to catch the Fire Toad when it is full-grown you may be in store for some hot rewards.

The game is a 5-reel 4-payline payways slot with 1.024 ways to win. There are four paying symbol levels and players should always be on the lookout for the Super HP, the Fire Toad King.

Some of the Fire Toad's favorite meals are represented by symbols, including the Firefly Scatter which acts as a Wild, and hitting one of them can light up the free spin feature and take your symbols on the reels to the next level.

The Hawaiian theme is truly amazing and is evident throughout all gameplay. The symbols include 5 different sized Toad symbols and 4 Hawaiian-themed card suit symbols. As mentioned, the Fire Toad King is the highest paying symbol, whereas the small tadpole is the least expensive.

This game is now available at the casinos using Play'n Go software, which includes thousands of platforms.