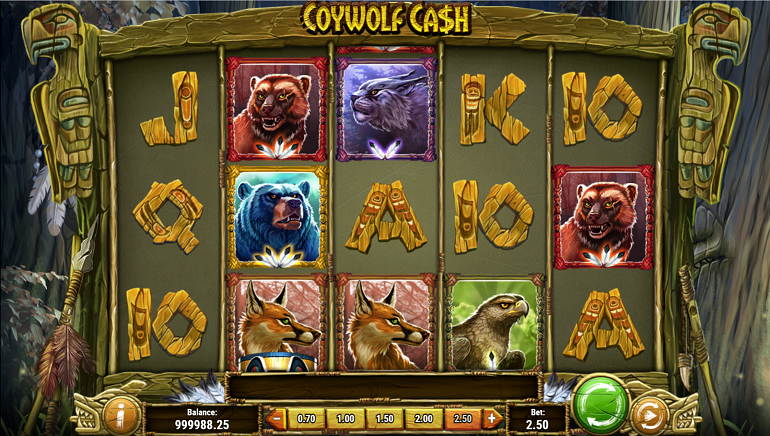 Coywolf Cash slot is the latest video slot game to be unleashed by leading playmaker Play’N GO. Fans get to hunt for prey in this 5x3-reel slot fiesta, with lots of cash up for grabs!

Play’N GO has unleashed a pack of apex predators in its latest video slot game, Coywolf Cash. This ferociously entertaining slot plays out on a 5 x 3-reel grid format, with 50 paylines. While the Wolves are hunting for prey, players can enjoy a unique Wild Reel to sniff out the cash on the plains. The wild symbol in the game is the Coywolf. It features as both a standard symbol which is capable of substituting for any low-paying symbol or high-paying symbol to form winning combinations on the active paylines. The wild symbol can also form in stacked combinations on reels 2 and 4, while the base game is in session.

The Predators are Ready to Hunt

The high-paying symbols in the game include natural predators such as the Hawk, the Fox, the Lynx, the Wolverine, the Black Bear and the Woodlands. The low-paying symbols in the game include the standard card symbols in slots games, such as 10, Jack, Queen, King, and Ace. When the Alpha Coywolf appears during a gaming session, it forms on the Wild Reel. This feature is triggered when the Mask Scatter symbol forms on the third spinning reel. Once this feature is triggered, it appears atop the grid and spins in a horizontal fashion. Players will notice a pack of Alpha Coyotes, and empty spaces, while combinations of potential symbols start forming.

Prey Spins form when 3+ Scatter symbols appear. The Totem Scatter symbol activates these Prey Spins. When 3+ Totem Scatters form in tow alongside the Mask Scatter, the real fun begins. That’s when the Prey Spins round kicks into high gear. Players can win 8, 11 or even 15 spins with 3, 5, or 5 Totem Scatter symbols respectively. Coywolf Cash slot is a high-volatility slot, with a standard RTP of 96.31%. It features plenty of interactive game play for avid slots fans. The minimum bet is 0.10 and the maximum is 100.00 per spin. The incredibly-detailed artwork lends plenty of depth to the action, with ferocious predators and mystical masks too.