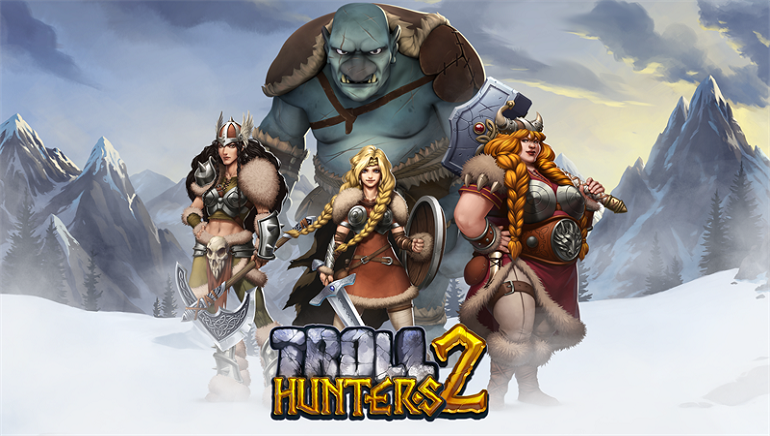 Leading online casino games developer, Play’N GO have recently launched the sequel to the smash-hit sensation from 2013, Troll Hunters. The new game Troll Hunters 2 is available exclusively with Kindred for a limited time.

Play’N GO has recently released the sequel to its universally popular Troll Hunters slot game from 2013. The new game – Troll Hunters 2 - is exclusively available with Kindred the online operator for a period of 9 months. After that, it will be available for widespread release across the market.­­

Play’N GO is betting on a solid reception from players via Kindred, which will have positive spin-offs for the company. The runaway success of Troll Hunters in 2013 cemented Play’N GOs place in the video slots industry, and this game brings plenty more hard-hitting action to the scene.

Troll Hunters 2 showcases many similarities to the original game, with epic Alpine backdrops, fearsome warriors, and whiteout conditions. 3D animation and artwork coupled with unique bonus features help to ramp up the excitement in this video slot game. Kindred is hoping to score a big hit with fans, and they alluded to this with the hashtag #2019GameOfTheYear.

If expectations are met, and developers are confident of this, this game will certainly generate lots of fanfare from players. Within 24 hours of launching, some €1 million in betting activity already took place, making this one of the industry’s most successful new game releases.

The game is currently available for Kindred for a period of 9 months, after which time it will make its way to the broader market.

Gamble Responsibly at All Times

Players are advised to gamble responsibly with Troll Hunters 2 and all other online casino games. Whenever real money is risked for the prospect of winning, caution is advised. It is important to set a budget, play within your means, and never to gamble with money that you can't afford to lose.