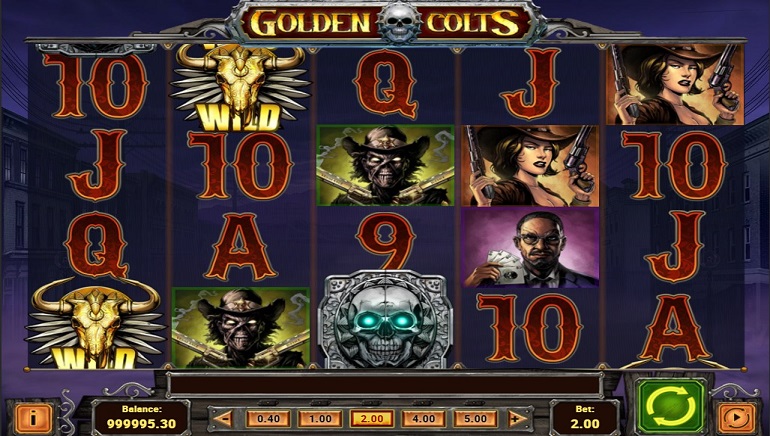 Golden Colts slot game is the latest action-packed video slot from renowned game maker Play’n GO. This gun-slinging slot game pits the Town Sheriff against the Ace-High Gang and it has all the makings of a fabulous Wild West-themed game!

The new slot from Play'n GO releasing today Golden Colts is set against a gloomy backdrop in a one-horse town. Multiple layers of heavy clouds are rolling in over the mountains as the Ace-HighGang makes its fateful trek into town. Lightning, thunder and rain set the scene as 5 reels, 4 rows and 40 lines of gun-toting gameplay light up your screen in a pyrotechnics display par excellence. The high-paying symbols include the immortal sheriff, the bad hombre, the poker player, and the lady gunslinger. Low-paying symbols include 9, 10, Jack, Queen, King and Ace.

The Sheriff Makes a Final Stand Against the Ace-High Gang

Golden Colts slot is a tribute to the immortal sheriff who carries a pair of Golden Colts to protect his deserted town. Part lawman, part beast, the sheriff is none-too-impressed with the Ace-High Gang raising a ruckus in his town. This captivating slot game is a classic Wild West-themed adventure, with all the makings of a legendary title. The game begins with a series of characters plastered over the gun holes on a 7-shot revolver. The most wanted posters reveal the miscreants terrorizing the town and the rewards for capturing them.

There are 7 action-packed bonus features in the game, more than enough to keep slots players on their toes. Of course, it's important to crank up the volume to the max to create the perfect ambience as the immortal sheriff fires his pair of Golden Colts at the gang. The Golden Ram’s Head is the wild symbol and it substitutes for other symbols except the Scatter to form winning combinations. The flaming-eyed skull is the Scatter symbol. When you land 3 x Scatters, the Golden Colts Bonus Game is triggered. There are 7 unique bonus features in this game. Players are required to spin the cylinder to reveal each feature.