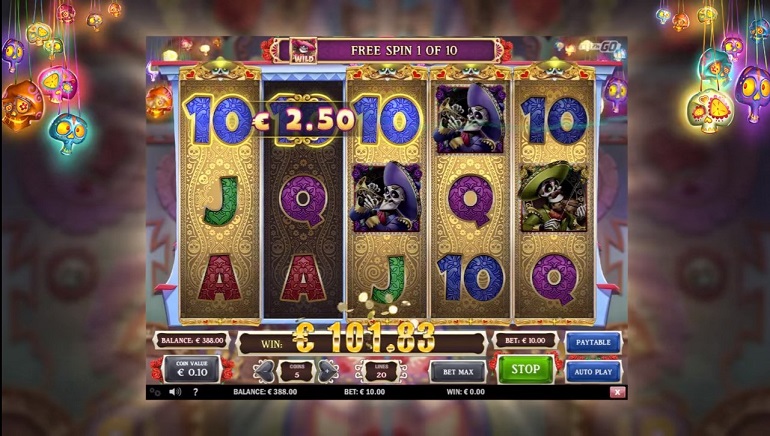 Play'n GO's newest slot, Grim Muerto, is anything but grim. In fact, it is actually a colorful, festive and lively celebration that centers around the Mexican holiday, Day of the Dead.

Play'n GO's newest slot, Grim Muerto, is anything but grim. In fact, it is actually a colorful, festive and lively celebration that centers around the Mexican holiday, Day of the Dead. Players will enjoy the upbeat Mariachi band whose deceased members still know how to belt out a good tune - and players will especially enjoy the possibility of winning up to 2,500 their original bets. Grim Muerto will certainly remind some of the popular 90s (and recently reworked) game Grim Fandango, from which it draws inspiration.

Play'n GO's Grim Muerto has 5 reels and 20 paylines, and bets range from 20p to £100 per spin. Reel symbols include a book scatter symbol, a candle, a guitar wild, various letters, and more. In the base game, when five guitars appear across a payline, players can win 50 times their original wager.

Additionally, there will be highlighted reels on every free spin - if a wild lands on one of these reels, it will duplicate itself and replace all other symbols on those reels. And finally, a high-value Mariachi symbol will be randomly selected to act as an additional wild throughout the feature - this can yield wins of up to 2,500 times players' original bets.

Grim Muerto is being released today, July 12, and will be available for play across desktop, mobile, and tablet devices. Look out for it at Play'n GO Casinos such as Video Slots Casino, SpinEmpire Casino, and Casino Cruise.