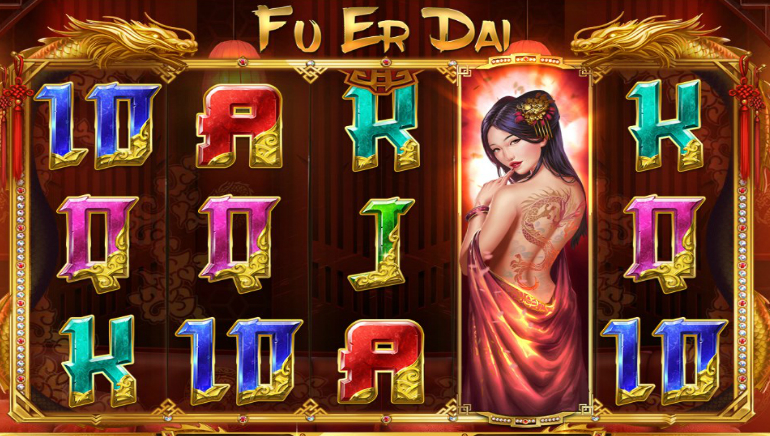 Play’n GO’s newest slot, Fu Er Dai, is a Chinese term for children of the nouveau riche; as a slot game, players can enjoy all the luxury and opulence that one would expect to find among such a crowd.

Play’n GO’s newest slot, Fu Er Dai, is releasing today, following the highly successful release of the company’s Big Win Cat slot only last week. Play’n GO’s newest title is a Chinese term describing children of the nouveau riche; as a slot game, players can enjoy all the luxury and opulence that one would expect to find among such a crowd.

Fu Er Dai (can you say that 5 times fast?) is an elegant 5-reel, 10-payline slot that features expanding wilds, sticky wilds, re-spins, and free spins known as WIN SPINS. The theme is Asian, and as such, the background depicts a coy woman with stunning artwork on her back (also known as the “Dragon Girl”). The soundtrack is both eerie and enchanting, and the tempo speeds up when wilds become sticky. The minimum bet is .$10 and the maximum bet is $100.00, with a default RTP of 96.50%, which is typical of Play’n Go slots.

There are 11 symbols in Fu Er Dai, including the Dragon Girl wild symbol, which can land only on reels 2, 3, and 4. Not only can the Dragon Girl replace other symbols in order to make a winning combination, but it can also expand to cover the entire reel, helping to form even more winning combos.  Other symbols include a gold watch, a shiny cell phone, a full wallet, tasseled keys, a slick-looking Asian man, and Asian-style letters.

When the Dragon Girl wild lands on reels 2, 3, or 4, a free respin with 1 sticky wild is triggered. When 2 or more wilds land, at least 5 WIN SPINS are triggered, during which wilds are sticky and prizes are guaranteed. Each wild that lands during a WIN SPIN generates an additional WIN SPIN, which can be triggered 20 consecutive times. The WIN SPINS are really what this game is all about. Because each spin has a guaranteed prize, players can garner some impressive wins.

Play’n GO is an online gaming software developer that offers a large suite of casino games and an easily-integrated back office. Play'n GO's games are featured on over 100 online casinos and are available in more than 32 languages.