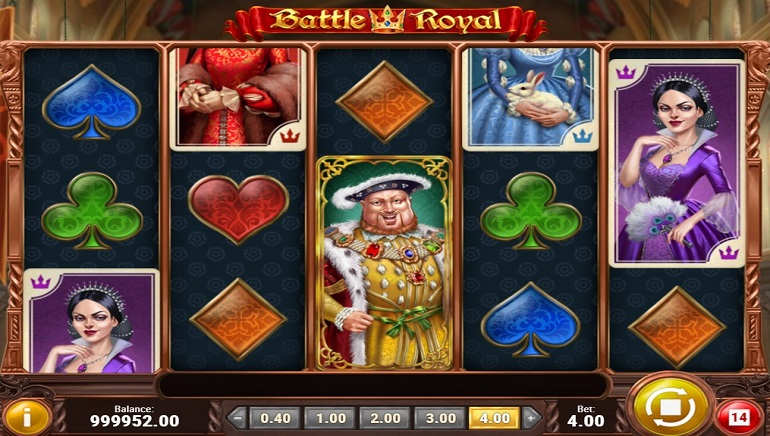 In Play'n GO's new slot, Battle Royal, players will encounter Henry III himself, along with his 6 wives, each of whom is competing for his affection. Along the way, there will be wilds, scatters, bonus features, and oh yes, beheadings.

Play’n GO’s newest slot, Battle Royal, is a funny take on one of the most infamous rulers in English history: Henry VIII. In Battle Royal, players encounter Henry III himself and his 6 wives, each of whom is competing for his affection. Along the way, there will be wilds, scatters, bonus features, and oh yes, beheadings. But don’t be alarmed - there’s lots of winning opportunities in this interesting Play’n GO slot - so check it out at Play’n GO online casinos!

In the base game, the Royal Flush feature can be triggered randomly, which turns all lower-paying symbols into the same symbol.

When scatters land on reels 1 and 5, players can choose between 2 features: Free Spins or Long Live the King. In the Free Spins feature, a guillotine appears on each reel and falls on every spin. If a wife lands below a falling guillotine, she’s beheaded, and then becomes wild for the rest of the feature. The free spins continue until there is only one wife left. If the guillotine doesn’t land on her head, the player returns to the base game. If it does land on her head, the Long Live the King feature is triggered.

The Long Live the King feature can be triggered from the Free Spins round or when scatters land on reels 1 and 5. During this feature, players must lead the king out of his castle while collecting treasures. The only catch is, Henry is being chased by the ghosts of his beheaded wives! So players can choose which treasure chests to open, but the feature ends if one of the wives catches Henry. If he’s not caught and escapes the castle, players get an additional multiplier.

While all this beheading may sound gruesome, Play’n GO has managed to create a humourous slot from one of England’s most notorious monarchs. Couple the entertainment factor with some unique bonus features, and it’s a game that anyone - history buff or not - can enjoy.