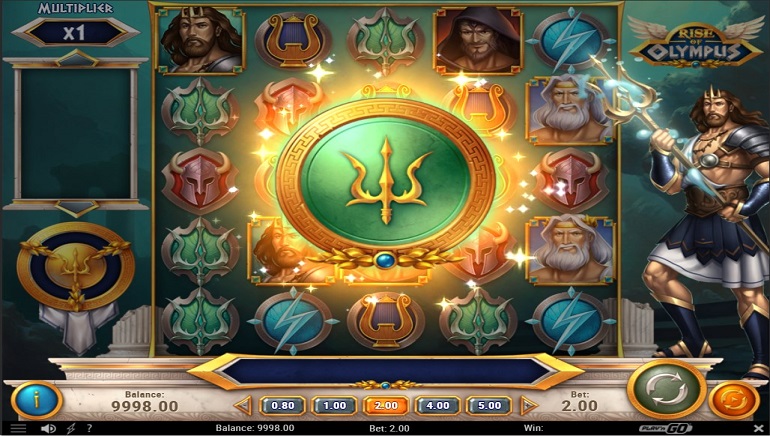 Get a full preview of the upcoming Rise of Olympus slot from Play’n GO, which is releasing on 23 August 2018.

For years now, Greek mythology has been used as a rich tapestry of creation for iGaming software developers. And Play’n GO is the very latest to explore the theme in the developer’s forthcoming Rise of Olympus slot, due for release on 23 August 2018 at participating Play’n GO casinos.

An advanced press release and pre-release demo have revealed all of the key details that shall feature in Rise of Olympus. Fundamentally, the video slot shall lean upon the Greek gods, including Zeus (sky and thunder), Poseidon (sea and storms), and Hades (the underworld).

Rise of Olympus breaks from the mould of standard five-reel video slots by adding two extra rows of symbols. Overall, this means that 25 symbols are presented on the slot interface instead of only 15. And those playing the game will find that they have to match at least three symbols, either vertically or horizontally, for winnings.

Before playing, the first step required is to assign a wager for the next spin. Play’n GO has simplified this decision by presenting multiple pre-assigned values for wagers. These begin from €0.20 and rise by €0.20 increments at the early stages before going up to the top level of £100.00.

Rise of Olympus will also be released with a number of special features, including Hand of God, which is triggered at random for spins that do not win. This can lead to the gods randomly transforming symbols (Hades), giving out two wilds (Poseidon), or destroying two sets of a symbol (Zeus).

Then, the Wrath of Olympus feature is a meter that can be charged up by winning with god symbols, eventually delivering a free round. Additionally, Each of the gods can also deliver their own format of free spins, with a smaller amount earning a larger number of recharges for the Wrath of Olympus meter.