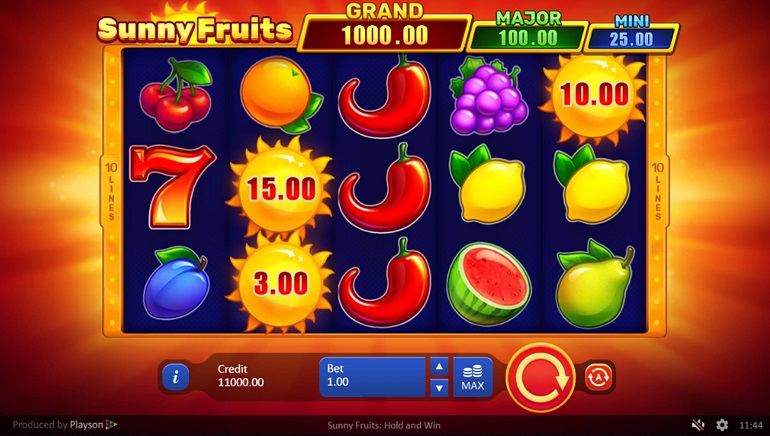 Snap the cold nights and step into the summer with "Sunny Fruits," the new slot from Playson.

Playson is one of the popular game developers among iGaming players around the world and their Funky Fruits series has been a hit. Sunny Fruits is the third titles to be added to the Funky Fruits series and it is set to warm up players up with chances of major wins.

Sunny Fruits is a 3x5 reel slot with 10 paylines and a ton of special features. Things get spicy when the chili pepper jumps on the reels as a Wild, which substitutes all of the game's symbols aside from the funky sun symbol. The jackpot starts to get really appealing when six or more Bonus symbols land on the reels as players will get access to the immersive Bonus game.

Within the Bonus round, players will get a minimum of three re-spins. The value of all the bonus symbols is all paid out when the Bonus game is completed.

Moreover, this new game is really exciting with three in-game jackpots. There is a Mini jackpot, a Major jackpot, and a Grand Jackpot. The latter pays out an incredible x1000 the total bet, which could translate to thousands of dollars.

"With its classic look and immersive gameplay, we're expecting Sunny Fruits to be a big hit with all of our players," said Vsevolod Lapin, Head of Product at Playson.

“Our Funky Fruits series has proved hugely popular with operators and we’re thrilled to add this new title to our burgeoning portfolio,” he continued.

As mentioned, Playson is a popular game developer that creates some of the world's best iGaming content. Based in the regulated European Marketplace, Playson has offices in Malta and in Ukraine and holds licenses of the UK Gambling Commission, the ONJN, and the Malta Gaming Authority. An award-winning developer, Playson now has a portfolio of 60+ HTML5 Omni-Channel games which can be found at many of the leading online casinos.