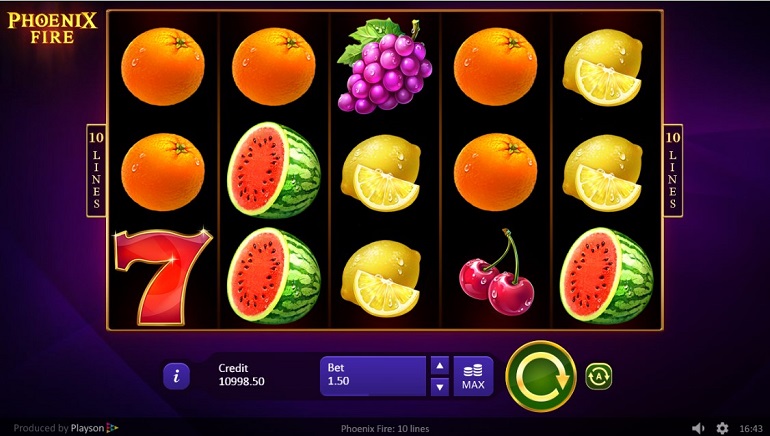 Phoenix Fire is a new slot from Playson that's just been launched at online and mobile casinos. Fruit symbols and a mythical bird create winning combinations for players

The latest slot from Playson sees a majestic mythological bird rising from the reels to complete winning combinations. Phoenix Fire also has traditional fruit machine symbols over the 5-reels and 10-paylines, with features such as a wild symbol that can expand across the game in a series of respins.

The black reels are set against a blue backdrop and most of the symbols that will be seen will be traditional items of fruit, such as grapes, watermelons and cherries, as well as bells and a red number 7. But this classic-looking slot machine also has the legendary Phoenix bird, which according to myth, rose from the flames to signify re-birth.

In the Phoenix Fire slot, the head of this creature is a wild symbol that can appear on any of the 3 middle reels and is able to act as others, also triggering a special feature. The Phoenix will expand to fill any reel that it lands on, locking in place as the other reels spin once more for free.

If any adjacent reels feature the Phoenix wild symbol in this bonus game, players are treated to an expanded image of the bird across both reels, while a further respin plays out. Should yet another wild appear, the feature repeats for a third and final time, with players collecting multiple wins as all three middle reels are filled with a single image of the Phoenix.

The 10 paylines run from both the left and right side reels, giving players twice the winning chances. Just 0.20 is needed to play, with a maximum wager of 100.00 making this game suitable for casual gamers and high rollers alike. It comes with a generous return to player percentage of 96.05%.

It's launched on 4th September and is set to become another hot favourite at casinos which feature the Playson range.