Playson Turns Up the Heat With Two New November Releases 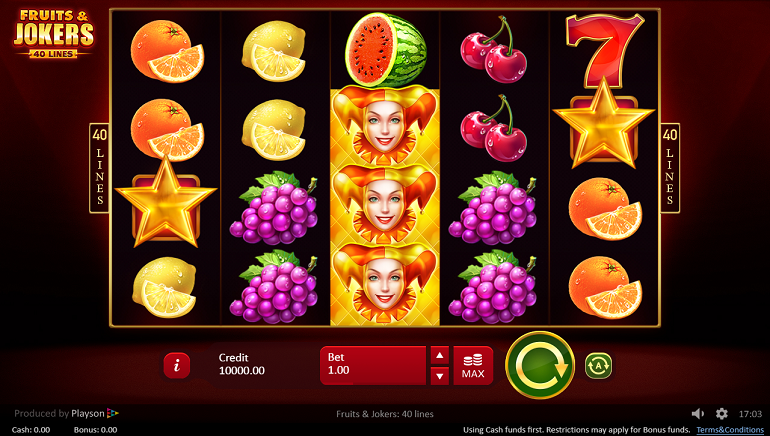 The Fruits & Jokers slot offers classic slot action boosted by modern graphics, while Wild Warriors, coming out later this month, takes players back in time and to the heart of Amazon.

Winter may be quickly approaching but Playson developers aren't taking things any slower because of it. The company has been staying very active, releasing at least two new games every month, and this continues in November. The first of two slots is called Fruits & Jokers, combining classic slot symbols with modern graphics and features. The second one, named Wild Warriors, celebrates fabled Amazon women, whose bravery and fighting skills are described in many legends and stories.

The Fruits & Jokers slot is a game with five reels, four rows, and as many as 40 paylines. Like the name suggests, symbols featured on the reels include lemons, oranges, grapes, watermelons, cherries, and 7s. Joker symbols are wilds while stars are scatters, so players will definitely feel in a familiar territory.

All symbols, including the highest paying 7s as well as wilds, are stacked on the reels, and with 40 paylines across, the Fruits & Jokers slot comes with a serious potential for some big win. The lack of free spins or other special bonus features is unlikely to bother fans of fruity slots as the base game brings more than enough excitement.

Travel to the Heart of Amazon

The second November release by Playson takes players to the heart of Amazon, with reels set on a backdrop of an abandoned battlefield. With three rows and 30 paylines, the Wild Warriors slot features different beautifully drawn Amazon warriors symbols, alongside war equipment and wild animals.

The shield is the symbol to look out for. Stacked on the reels, it acts as a scatter and landing seven or more of them anywhere on the grid triggers the free spins bonus. Players can get anywhere from 8 free spins for landing 7 scatters to 25 free spins for 9 or more shields. During the bonus, warrior symbols also appear as 2x2 and 3x3 Colossal Symbols, creating more opportunities for big wins.

The Fruits & Jokers slot is already out and available across Playson online casinos, while Wild Warriors is set to hit virtual shelves on November 22. Both of these new releases should bring plenty of excitement for the players and clearly prove why Playson continues to be one of the leading game developers in a highly competitive industry.