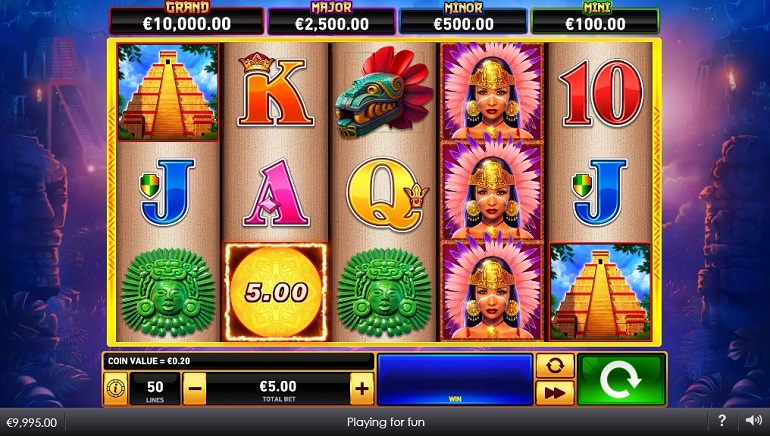 Sky Queen is the first slot to debut from the brand new Fire Blaze series. Compete for four jackpots in these Playtech-exclusive slots.

May 2019 has brought the release of a whole new series of slot games at Playtech casinos. Developed by Rarestone Gaming, the Fire Blaze slots promise to explore “ancient cultural themes”. First up in the schedule is the Sky Queen slot and the prospect of playing for four different jackpots.

Sky Queen is distinctly South American in nature, with the style reminiscent of the Incas and other ancient civilizations. Set amid pyramids in the depths of a dark jungle, Sky Queen begins with a straightforward infrastructure in that there are five reels and three rows that comprise the slot’s interface.

At a glance, the interface also clearly shows that there are fixed paylines. Despite that, it will be possible to wager from only €0.50 per spin on Sky Queen. And there are many more values above that en route to the slot’s highest possible wager of €500.00.

When adjusting the wagering value, Sky Queen changes the value of the four jackpots accordingly. From the lowest to the highest, the jackpots are comprised of Mini, Minor, Major, and Grand. As the wagers increase, so do the potential winnings up for grabs on each jackpot.

Sky Queen wild symbols have included on reels two, three, four, and five. These are used to substitute for symbols missing on the paylines. However, the wilds do not have the power to substitute for either the scatter or the sun symbol. The pyramid scatter symbols add value to the experience by triggering eight free spins if three or more can be landed on the screen.

Then there are the sun symbols that present values of winnings. Landing six or more sun symbols can trigger the Fire Blaze Respin causes all winnings or jackpot star symbols to be held in place for another spin. Competing for the jackpots will require players to land 15 jackpot stars on the reels.