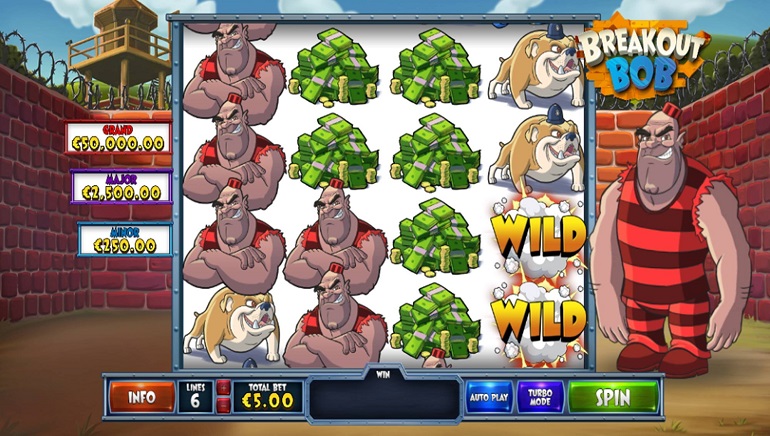 On the surface, Playtech's Breakout Bob looks like a cute cartoon slot, but once players start spinning, the game’s true potential is revealed. The game includes wilds, 2 sets of free spins, multipliers, and a Fortune Wheel with 3 jackpots.

Breakout Bob from Playtech is a prison-themed slot that looks simple enough on the surface, but dig a bit deeper and you’ll discover a plethora of features. Wilds, 2 sets of free spins, multipliers, and a Fortune Wheel with 3 jackpots, topped off with a maximum potential haul of 15,000x the stake.

Breakout Bob is a 4-reel, 6-payline slot that’s playable on all devices. Bets range between $.05 and $500 per spin, making it suitable for a wide range of players. The RTP is a bit above average at 96.52% and the volatility is high. The reels are set in a prison yard and the characters are all cartoon, making it more funny than serious.

Wins are formed when 3 or 4 matching symbols land on a payline starting from reel 1. Symbols include piles of cash, a bulldog, handcuffs, an intimidating muscled inmate, and a policeman. The latter is the highest-paying and awards 120x the stake for 4 of a kind. There are also explosion wilds and bomb scatters. The wild pays out 600x the stake for 4 in combination.

During the base game, the bomb feature can be randomly activated (pun intended). When this happens, players get between 4 and 6 free spins. There are multipliers that increase with each spin that doesn’t score a win. The maximum is 25x the bet. When players finish their free spins or hit a winning combination, the feature ends. Bob, the inmate, throws the bomb onto the reels and the multiplier is applied. Ideally, it would be best for players to go a few spins without winning and then land a win, that way the multiplier has time to climb.

When 3 or 4 scatters land on the reels, the Free Spins bonus round is triggered. Players win 12 or 18 free spins, respectively. Scatters that land during this round are collected in a meter. On the final spin, all the scatters from the meter turn into wilds and are dropped randomly onto the reels. Players who land another 3 or 4 scatters at the same time can get an additional 4 or 6 free spins.

On the surface, Breakout Bob looks like a cute cartoon slot that’s a bit juvenile, but once players start spinning, the game’s true potential is revealed. Not only is there a Grand Jackpot of 10,000x the stake, but the maximum payout can reach 15,000x the stake. Bear in mind that the game is highly volatile, but when the stakes are high, so is the potential win.