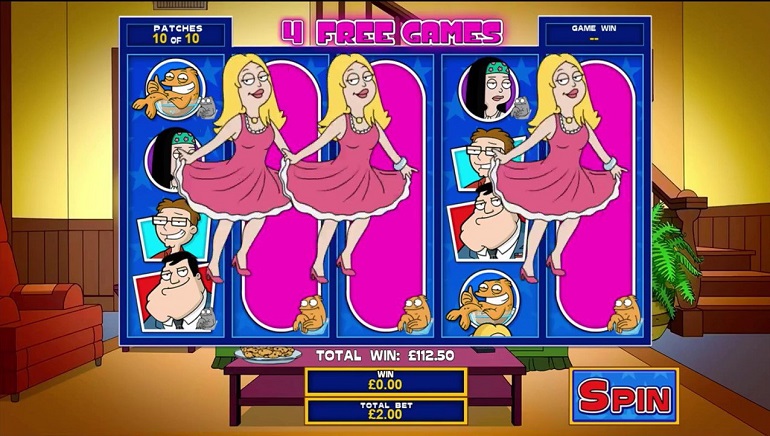 And now for something completely different! We've seen quite a few new slot titles hit the virtual shelves since the beginning of 2017, and now it's Playtech's time to shine. Their latest American Dad! slot, inspired by the award-winning, legendary animated series brings tons of action and heaps of fun with your favorite characters from the Smith family.

American Dad! premiered back in 2005, and since then, the show has won numerous awards and become one of the favorite pastimes of people all over the US and around the globe. The upper middle-class Smith family, with father Steve, wife Francine, daughter Halley, Klaus, the goldfish, and Roger, the alien, takes center stage in this latest Playtech's release.

The game features music and animations from the original series, so fans of this animated sitcom will really get to enjoy every moment they spend spinning the reels. The backdrop of the slot changes as you play along, featuring various familiar scenes from the American Dad! show.

Plenty of Ways to Win

Apart from the amusing theme, American Dad! is also a very exciting slot regarding potential payouts. Featuring 40 paylines across 5 reels, this game comes with the possibility of some really huge wins thanks to its numerous features.

Schmooblydong Wheel is the game's most exciting symbol, appearing only on reels 1, 3, and 5. This is the key to free spins and the main bonus feature. Landing two Wheels will trigger the American Dad! Bonus, and this one is a lot of fun, as it keeps changing with different additional wilds, stacked symbols, and more.

If you also land the third Wheel on the same spin, you can win up to 25 free extra free games, with all the triggered features active during the free spins.

With Steve running around in his underwear, Roger puking out the extra wilds, and much more, American Dad! promises a lot of fun and some good laughs. If you want to check out the game for yourself, you can find it at Playtech-powered casinos.