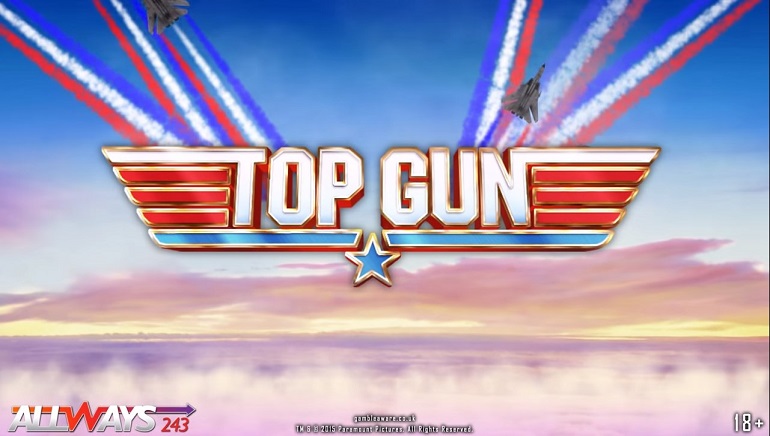 Play a slot machine based on the Top Gun movie and enjoy original footage and high-tech graphics on the reels.

Playtech made the most out of the rights to create a slot machine based on the 1986 action movie created by Paramount Pictures and launched a hot new Top Gun game. The release was made across desktop and mobile platforms at leading online casinos powered by the famous provider like bet365 Casino, 7Regal Casino and Omni Casino.

The Top Gun slot machine comes with 243 ways to win and not only does it include actual clips from the movie starring Tom Cruise, but it also has amazing graphics and animations to really put the player in the pilot’s seat of a F-14 Tomcat jet.

Maverick and Goose can be heard talking to each other while on a mission and they can help create wild symbols randomly on the screen as the fighter jet fires on to the reels. Called Dog Fight Wilds, the feature can create great ways to win in addition to the action it provides to the gameplay.

Free spins can be obtained by getting at least three scatter symbols at the same time. During this mode, the action gets even more intense as each missile used in combat can create multiple wilds for the spin.

Another Premium Game in the Playtech Collection

Playtech has certainly made a great collection of premium branded slots which include more than a handful of Marvel games. The recent launch of the Top Gun slot takes the provider one step further and it is the perfect time for the release since the famous movie will celebrate its 30th anniversary next year. Tom Cruise has even stated that he would like to take part in the sequel which is now being written.

The seat is waiting for the dog fight in the Top Gun slot and excitement is guaranteed on desktop PCs, smartphones and tablets.

Get Locked & Loaded with Girls with Guns Slots!