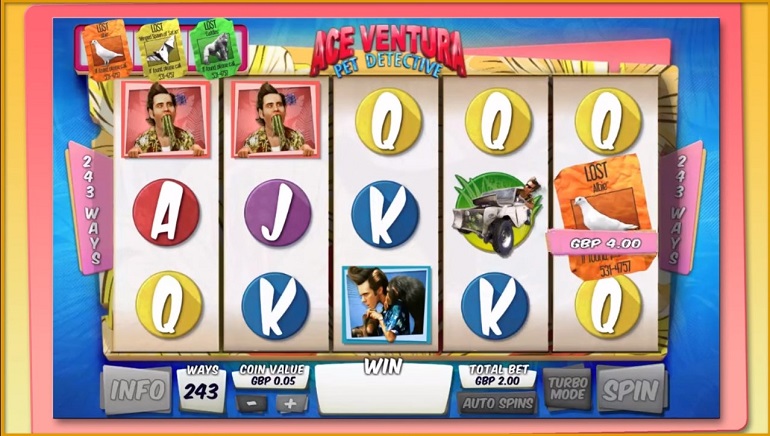 Alrighty then, slots players! Playtech has finally produced the slot game that all Jim Carrey fans have been waiting for: Ace Ventura: Pet Detective, based on the hit 1994 comedy starring Ac Ventura, an eccentric sleuth who helps pet owners recover their lost animals. The Ace Ventura slot game will be available for play at Playtech-powered casinos such as bet365 Casino, Flamantis Casino and 7Regal Casino, on both desktop and mobile devices.

The 1994 blockbuster starred Jim Carrey and Courtney Cox, with a special appearance by Miami Dolphins player, Dan Marino. The movie grossed $107.2m at the box office and was so popular that Carrey was back on the silver screen again the next year as the weirdly lovable pet detective in Ace Ventura: When Nature Calls.

About the Slot Game

Ace Ventura: Pet Detective is a 5-reel, 243-ways-to-win slot game that features memorable characters from the movie, including Ace himself and lots of his animal buddies. Special features include bonus rounds, “animal modifiers,” free spins, scatters, wilds and more.

Playtech chief operating officer, Shimon Akad, commented on the new game, “Ace Ventura is a fantastically colourful addition to our extensive casino portfolio, offering exciting and engaging gameplay, and is sure to be a hit with our licensees and their players.”

Playtech was launched in 1999 and has since then become the largest online gambling software supplier in the world. Playtech offers a product suite that can be fully integrated into a cross-platform offering, and their online gaming applications include casino, poker, bingo, sports betting, live gaming, casual and fixed odds games.

Playtech’s slot offerings include a number of movie-based games, including The Mummy, Gladiator, King Kong and more. Just last month, Playtech released another film-based slot game, Top Gun, the memorable 1980s film with the famous quote, “I feel the need, the need for speed.”