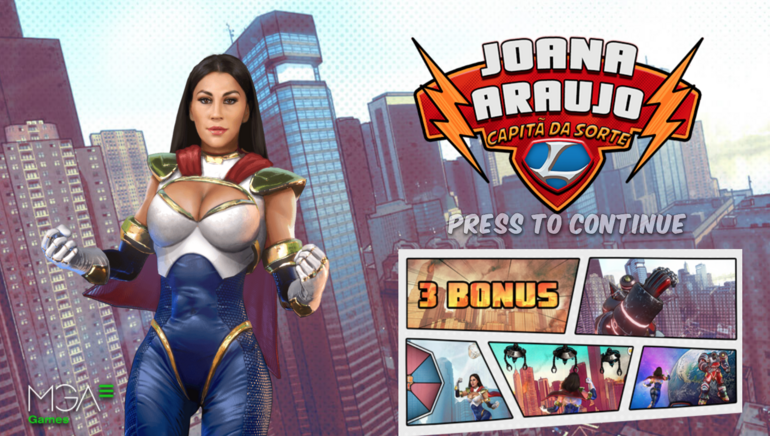 The popular actress and influencer captures the spotlight in Capitao Sorte, a fresh release out of the MGA Games' workshop localized for the Portuguese market.

Combining slots with popular contemporary topics and characters has been a recipe for success for many game providers as of late, and MGA Games has taken this idea to a new level, releasing a series of slots starring some of the best-known and most popular public figures in Portugal.

The company's latest release, Capitao Sorte, puts the spotlight on Joana Araujo, a famous Portuguese actress and influencer. The game features Joana's voice and images, both of which players in the country are very familiar with.

This slot represents the adaptation of MGA Games' Captain Lucky game, which was released for the global market a few weeks earlier. While the slot kept all of its main features, the biggest change was the introduction of Joana Araujo as one of the heroes fighting to save the world in this exciting and action-packed release.

The new MGA slot brings back the comic book design that we haven't seen featured in many of the latest slots. The background story is perfect for this style, though, as the titular heroine Joana Araujo takes on the role of a superhero tasked with saving the world from the pending doom.

The story may not be original, but the MGA Games team has done an excellent job in terms of delivery, making Capitao Sorte an exciting 243-way slot that offers non-stop action. The base game features linked reels, with at least two reels synchronized on every spin, with the possibility of three, four, or all five reels getting synced on any given spin.

In addition to a fun base game, Capitao Sorte also comes equipped with several exciting bonus features players can look forward to. Landing three bonus symbols on the reels triggers the mini-bonus selection screen, offering a choice between three bonus games. These smaller bonuses offer the maximum prize of up to 196x the base bet.

Landing three or more Joana Araujo scattered symbols triggers the main Free Spins bonus. Players can win up to 20 free spins featuring identical reels, and all wins doubled. This is where the game shows its true potential and where it can reach its maximum payout of 2,916 times the bet.

Capitao Sorte thus combines a famous character, fun gameplay, and solid big-win potential, making it a slot that will likely grab a lot of attention among Portuguese players and operators alike in the weeks and months to come.