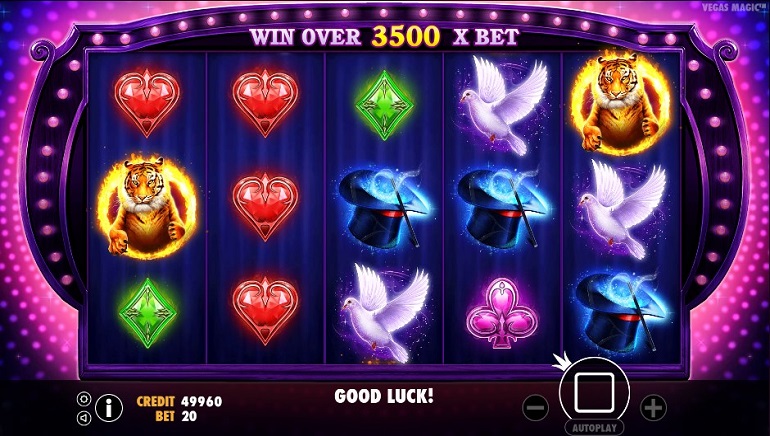 Las Vegas is not only world-famous for its range of casinos and hotel resorts, but also for the vast array of entertainment. And one of the most renowned forms would have to be the magic and illusion shows. Aiming to tap into that field is Pragmatic Play, which released its Vegas Magic slot last month.

Pragmatic Play has designed Vegas Magic with bright, dazzling lights that are in line with Las Vegas stage shows. This HTML5-compatible background is used to frame a five-reel by three-row interface that is used to show off flaming together, flying doves, magician hats, playing card symbols, and more.

Vegas Magic has been designed to present the wagering options when players click on the plus or negative arrows on the screen. This shows that there are 20 fixed paylines, which is also confirmed by the paytable. Meanwhile, the number of wagering coins can go from one to 10, with each of those possibly worth from €0.01 to €0.50.

A magician appears as the wild and can substitute for most symbols that are missing, except for the scatters, which can pay out in any positions. The wilds are capable of appearing on the second, third, and fourth reels, while also being able to expand when they land on the first spin of the Tumble Feature.

The Tumble Feature works by disappearing any winning symbols from the previous spin. The remaining symbols will then drop down before the empty positions above are filled by new symbols with no additional wager needed.

Pragmatic Play has imposed no limits on the Tumble Feature, making it possible for players to build long winning streaks. After the first win, a 2x multiplier will be applied. The multiplier will then increase by 1x with every consecutive win until the streak is broken.