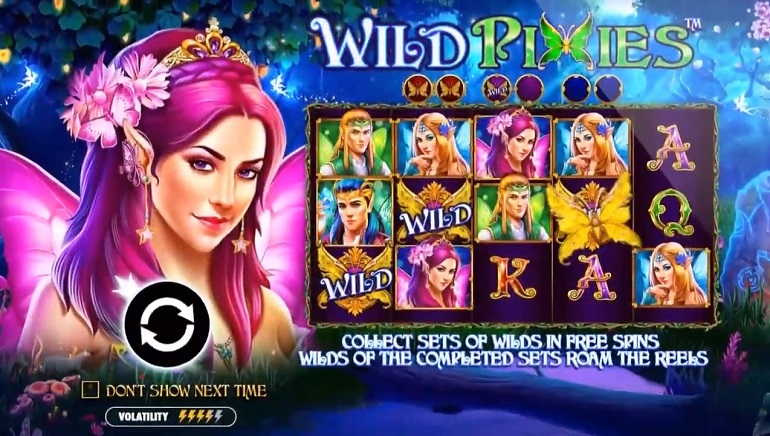 Spring has arrived and Pragmatic Play gives players an opportunity to fully immerse themselves into a wonderful wild forest filled with vivid colors, golden butterflies, friendly little pixies, and valuable diamonds. The company's latest release named Wild Pixies is a game that celebrate nature at its finest and offers some nice wins along the way.

Pixies are lively little creatures so catching them isn't an easy task. However, that's exactly what players need to do in this Pragmatic Play 3x5 slot with 20 paylines. Blue and purple-haired pixies are the highest paying symbols, followed by the blonde and brunette ones. The golden butterfly symbol acts as a wild, substituting for all symbols except for scatters.

The game is set on a backdrop of a lush forest bursting with life and calm music playing in the background helps create the calming and relaxing atmosphere this game is all about. Wild Pixies is a medium volatility slot, so it is designed for players who like their sessions to last a while.

Landing three diamond scatters on reels 1, 3, and 5 triggers the free spins mode in Wild Pixies. During free spins, the Roaming Wilds feature is active, significantly improving chances of big wins. Free spins can also be triggered if the scatter just misses on the last reel, thanks to the random nudge feature, which can bring it back onto the reels.

The bonus kicks off with eight free spins and there are empty spaces above the reels. These empty spaces are filled with wilds that land on the reels during the bonus. There are three different sets of empty spaces with two boxes each and whenever one of these sets is filled, two more spins are added as well as a roaming wild that remains on the reels until the end of the bonus.

Like the name suggests, these wilds move to a different position on every spin and players can potentially activate all three of them in a single bonus. However, there are no scatter symbols appearing during free spins, meaning the feature can't be fully re-triggered.