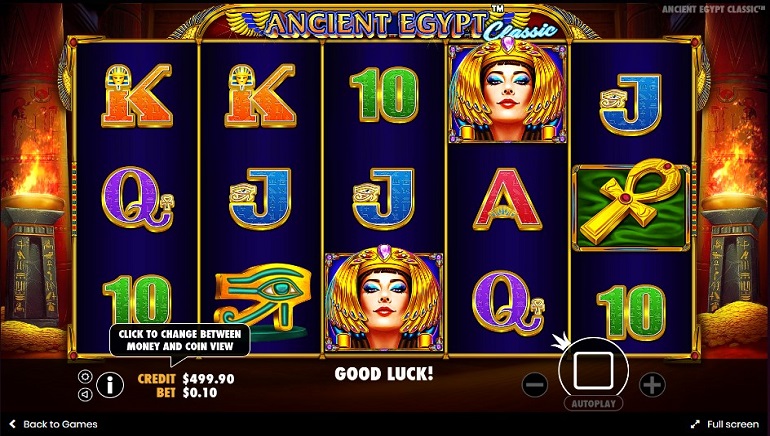 Ancient Egypt's mysteries are just as alluring today as ever. Renowned game maker, Pragmatic Play has decided to dip its toes into this mystical realm with the release of its latest blockbuster slot game, Ancient Egypt Classic.

This latest slot release has fans chomping at the bit. Already, pundits are calling it a game changer; a creative work of art and a masterful recreation of a bygone era. Ancient Egypt Classic spins into fine form with 5 reels and 3 rows of mystifying excitement. 3D visual artistry comes alive with fires burning in golden cauldrons on hieroglyph-encrusted pedestals. The game sports all the popular symbols of the time, including the Eye of Horus, Anubis, the Ankh, Cleopatra, the Golden scarab beetle, and majestic 10, Jack, Queen, and King symbols.

The Rebirth of an Ancient Empire

Pragmatic Play has not held back with its latest slot release. The game features a combination of unique elements including Autoplay functionality, and turbo spins. This game comes to life on 31 October 2018, much to the satisfaction of adoring slots fans. The wild symbol substitutes for other symbols except for the scatter symbol to form winning combinations. It is represented by the scarab beetle.

When players land 3+ scarab beetle symbols on the reels, a fabulous bonus feature will be activated. Players will then receive 10 free spins. During the game, a unique symbol will be selected – randomly – which can appear during the bonus feature and expand across the reels to form monster-sized wins.

The entertaining bonus feature is packed with an array of fun-filled symbols. Players are treated to a lavish array of winning combinations, fashioned off the allure of ancient Egypt. The range of games available through Pragmatic Play includes 100+ HTML5 slots games, including the world-famous Da Vinci's Treasure and Wolf Gold.