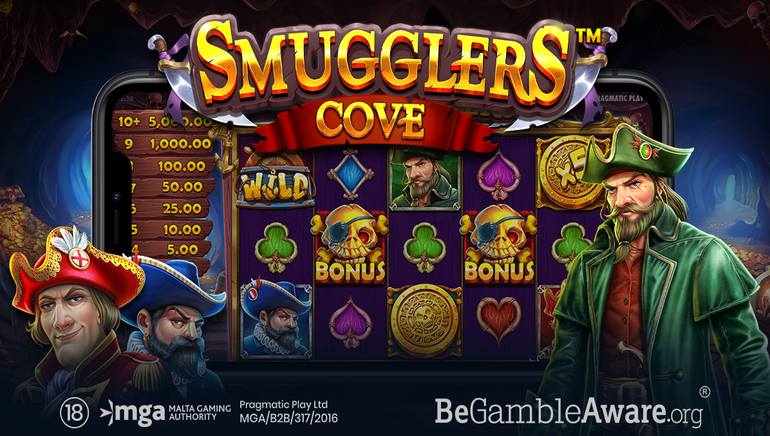 Check out Pragmatic Play’s latest releases and try to win a fortune in anticipation of the winter holidays with Smugglers Cove.

Pragmatic Play has released a brand-new slot that goes by the name of Smugglers Cove. The company continues its ambitious project of releasing up to 5 new slots every month. Their portfolio already includes more than 200 HTML 5 slots and it is growing at a steady pace. The latest slot takes players on a fantastic voyage that could culminate in winners claiming a fortune with one lucky spin of the reels.

Brave the Pirates and Claim a Treasure

Smugglers Cove is based on a popular theme among online slots developers. Players embark on an epic quest where they are tasked with discovering treasures hidden away by smugglers. To accomplish this, punters are supposed to spin the reels of the slots and create winning combinations. The wild symbol is depicted by a ship steering wheel and it can substitute all the symbols except for the bonus. It is pictured by a skull image, which in this case is a pleasant sight because it acts as a key to the treasure chest.

Lucky players will discover at least three bonus symbols across the screen to start the free game. Pragmatic Play has made this game mechanics more exciting by throwing a wheel of fortune into the mix. Players spin the wheel and based on where it stops, they will collect a lower or higher number of free spins. You can unlock a minimum of eight and a maximum of 20 free spins, so the difference can be considerable.

If you discover five or more coin symbols during the free game, you will open the treasure chest. The maximum payout is 1000 times the stakes for punters who find 15 coins on the screen. Things get even better for punters who discover the randomly triggered Super Wild Coins and Super Coins. These can pop up across the reels when least expected and when they do, they produce multipliers equal to 10 times the stakes.

Pragmatic Play has released the new game in the nick of time for punters to celebrate the winter holidays. It continues a string of popular releases that include the Christmas Big Bass Bonanza™, Santa’s Wonderland™, and John Hunter title, Book of Fallen. Smugglers Cove isn’t exactly a Christmas-themed slot but is an immersive game that will quickly get players in the mood for gambling. It is a mobile-friendly game that can be played on iOS and Android-powered devices for free or real money.