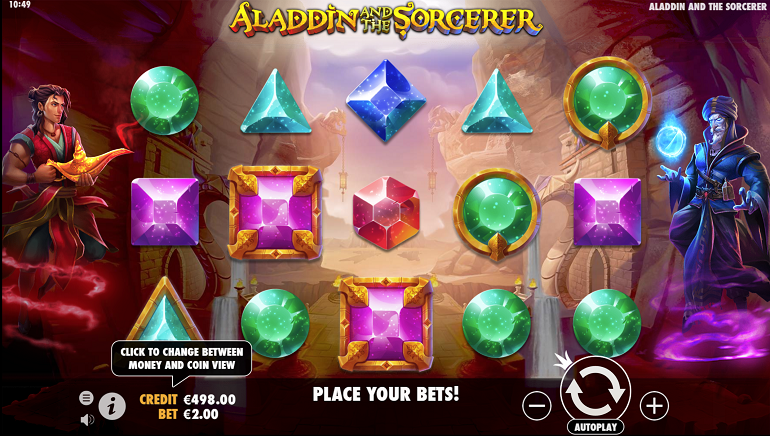 Aladdin and the Sorcerer is a magical new slot from Pragmatic Play, giving players the chance to battle for re-spins and multipliers.

Aladdin has existed for a couple of centuries as a Middle Eastern folk tale within One Thousand and One Nights, which is a wider collection of tales. Most recently, Aladdin stepped onto the silver screen in 2019, having previously been seen in 1992. Now, the orphan hero is making an appearance in Pragmatic Play's Aladdin and the Sorcerer slot.

The screen loads to show Aladdin floating to the left side on a red magic current being produced by his magic lamp. On the right side, meanwhile, is the Sorcerer from Maghreb, floating on a purple current and causing a bright blue orb to float and spin.

The main interface is produced with five reels, three rows, and 20 fixed paylines. A series of colour jewels can appear, and each has a more valuable version with gold around the edges. If needed, there are wild symbols with the ability to plug in payline gaps on the second, third, or fourth reels.

Aladdin vs. the Sorcerer

Aladdin and the Sorcerer appear as the bonus symbols and can land only on the first and fifth reels, respectively. Each carries the power to be used as a wild symbol, but the standard wild symbols cannot be used in place of the two powerful foes.

The landing of Aladdin on his own will cause anywhere from three to six wild symbols to be placed at random on the screen. And the very same outcome will occur if only the Sorcerer is landed alone on the fifth reel. If both land simultaneously, then this causes reels one and five to be stacked with wilds and trigger a re-spin.

At this point, a battle occurs and the feature will advance to a second level if Aladdin defeats the Sorcerer. This leads to three re-spins being awarded, while each spin will cause a multiplier to increase and be applied to the winnings.