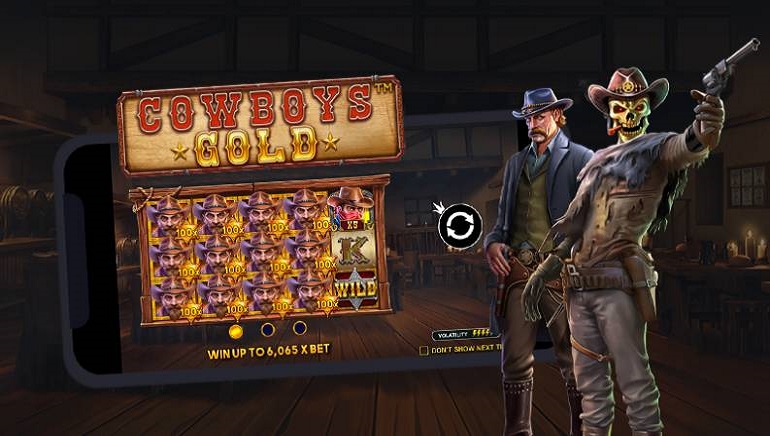 Pragmatic Play is one of the leading content providers in the iGaming industry, and its new release is a real western adventure. Cowboys Gold, the newest 3x5 video slot will keep players on their toes and ready to draw their six-shooters against a band of outlaws and the Renegade. The game features well-known western symbols including the Sheriff, who acts as Wilds, and, the Renegade, who can trigger the unique Money Collect feature. If you start the Money Collect feature and you land on a Cowboy with any value, you'll get those credits, instantly.

There are also skull-faced outlaws that will trigger the Spins mode if three or more are hit. The outlaws may have a multiplier attached to them. The Renegade plays an even bigger role in the game and if he lands on the 5th reel, any outlaws of value on the reels will be collected by the player. He is also a Bonus symbol in the main game and in the bonus round. If players hit three bonus symbols or a Bonus and a Renagade hit on the same spin then even more respins can be triggered.

The game is a part of the popular Megaways titles, which have become fan favorites.

Lena Yasir, Vice President at Pragmatic Play, commented: “Cowboys Gold takes players to the Wild West in search of big wins in a thrilling addition to our Gold range of titles. With the Renegade playing an important role, he’ll soon become a player’s best friend, while the increasing multiplier in Free Spins means any spin could turn into a lucrative win.

“Creating games that appeal to a wide variety of players is important to us and we’re very proud of our intense roadmap which delivers high-quality content on a weekly basis.”

Pragmatic Play is an award-winning provider of the iGaming industry. The developer currently has well over 200 HTML5 games in its portfolio and releases up to 5 new games per month.