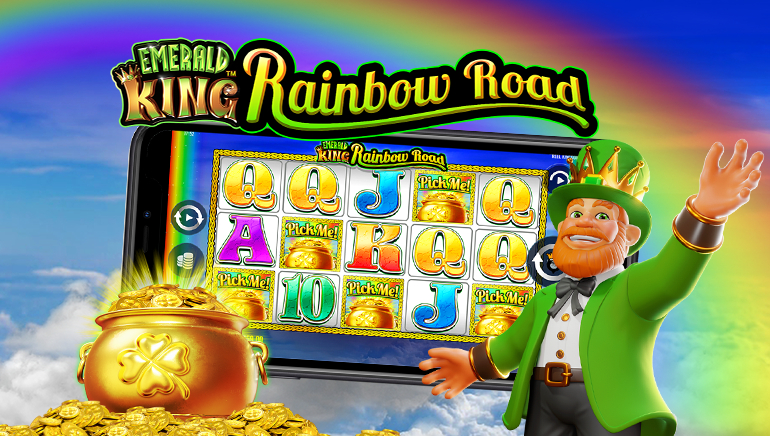 The new Pragmatic Play slot offers several exciting bonus features and the potential to win up to 20,000 times the base stake inside the Rainbow Road feature.

Pragmatic Play has partnered up with Reel Kingdom once again, creating a sequel to their Emerald King slot. The new game is called Emerald King Rainbow Road and features the traditional Irish theme combined with several exciting features players can look forward to.

The Luck of the Irish

The new Pragmatic Play slot features the standard setup with three rows and five reels across, offering 20 fixed paylines. Symbols are consistent with the theme, featuring pots of gold scatters, golden four-leaf clover wilds, and the game logo as the highest paying symbol.

The upbeat music playing in the background adds to the overall experience, making Emerald King Rainbow Road fun and enjoyable to play. In addition to regular line wins, players can also look forward to several special features that can be triggered on every spin.

The new Pragmatic game isn't just about bright colors and cheerful music. The slot follows the latest industry trends, offering players' a shot at some wins, with the maximum win being 20,000 times the base stake.

To have a shot, players need to land at least three Lucky Leprechaun scatters on the reels, which will trigger the Rainbow Road feature. In the feature, they'll get to pull the leaver on a mini slot, allowing them to move down the road, collecting prizes along the way. Should they reach the end, there is the Big Money bonus awaiting, with the top prize of 20,000x.

There are a couple of different bonuses as well. The Emerald King bonus can trigger randomly on any spin, with all five reels turning green. This will bring up between one and five mini slot machines featuring red, blue, and yellows sevens, and awarding cash prizes on each successful pull.