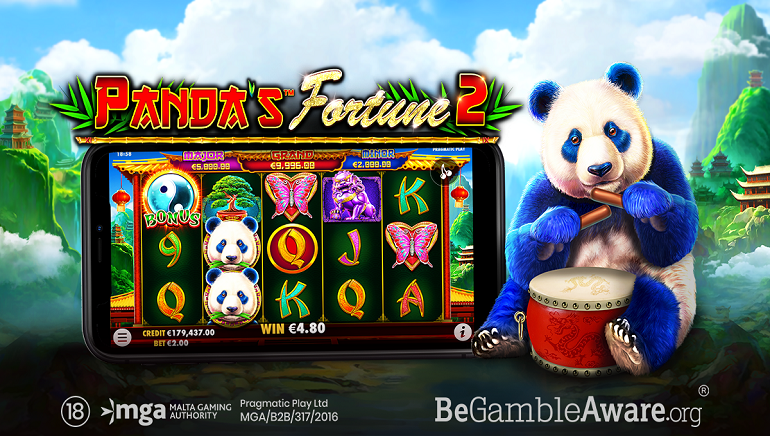 After the success seen from the first title, Pragmatic Play hopes to do it again with Panda's Fortune 2.

Pragmatic Play, one of the leading content providers to the iGaming industry, has released a new title that is once again based on the lovable Panda bear in its latest slot, Panda’s Fortune 2.

The first game, Panda's Fortune, gained popularity among a wide variety of players due to the fun-loving Panda himself and the possibility to win some hefty jackpots. The new addition, Panda's Fortune 2, is a 3x5, 25 payline video slot with a ton of generous special features.

Most of the symbols on the reels have a special golden version, which provides a chance of winning up to 5,000x the original stake. There are a couple of different game modes, both of which have the golden symbol feature, which can take players' wins to the moon. There are random prizes awarded for getting a golden symbol in winning combinations of three, four, or five of a kind symbol, including one of the jackpots.

The bonus round is triggered by three or more scatter symbols, wherein the golden symbols act as a progressive feature. During this time, if an icon turns to gold, that same spot on the reels will always be earmarked as a gold symbol for the remainder of the free spins.

This game is very relaxing, and the reel icons are all recognizable, including a koi fish, bonsai, ceremonial dog, frogs, and more. The panda will be seen on the reels regularly, chewing on a bamboo shoot.

The game joins the first-rate offering by Pragmatic Play, including games like Cash Elevator, Buffalo King Megaways, and many more, including award-winners like Sweet Bonanza and Wolf Gold.

Yossi Barzely, Chief Business Development Officer at Pragmatic Play, commented: “We pride ourselves on creating engaging opportunities for our players, and updating iconic slots is something we love providing for our fans.

“Panda’s Fortune 2 offers huge win potential, multiple Jackpots, and a bonus Golden symbol chance, and we can’t wait to see how our fans like it.”

Pragmatic Play is one of the most active studios in the world and currently produces up to five new slot titles monthly.