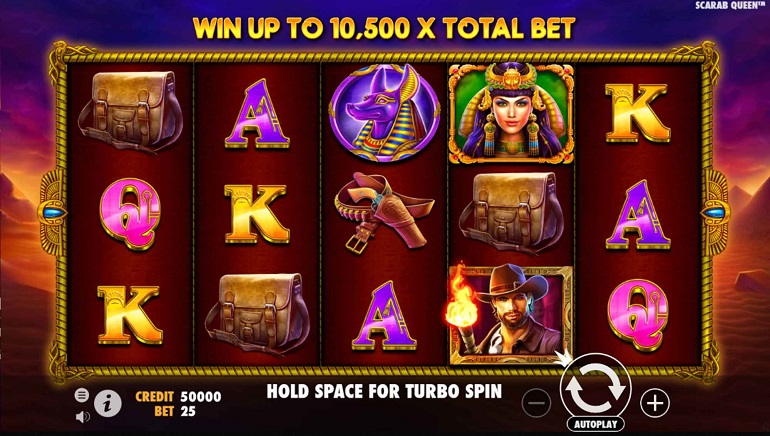 John Hunter & the Tomb of the Scarab Queen is a new slot from Pragmatic Play where players will find valuable beetles and a wild queen.

Pragmatic Play has launched the latest in a series of slots themed around a brave explorer. John Hunter & the Tomb of the Scarab Queen takes out intrepid adventurer on a quest to uncover the mysteries of ancient Egypt.

Players will discover reel respins, win multipliers and free games, with the chance to unlock great rewards in each spin.

John Hunter & the Tomb of the Scarab Queen plays out over 5 reels, crossed by 25 paylines. it can be accessed on desktop and mobile devices, with a bet range from 0.20 to 125.00 per spin to suit most budgets.

The symbol of John Hunter pays back 32x the total stake when he fills a whole line, while the Egyptian queen is a wild symbol who helps to complete lines by acting as others.

Scarab beetles can appear on reels 1 to 4, each carrying a cash value. If they land at the same time as a 'Collect' beetle appears on reel 5, any of 5 special features are triggered. Players could collect all the values, claim an extra credit, or grab a multiplier of up to 25x the combined beetle values. The symbols could expand over whole reels to boost payouts, or the reels could respin, for the chance to land extra scarabs.

John Hunter & the Tomb of the Scarab Queen also comes with a free spins bonus round, during which all scarabs are collected and on the final spin, a giant beetle fills reels 1 to 4. The fifth reel spins for a chance to collect all beetle values.

Yossi Barzely, Chief Business Development Officer at Pragmatic Play, said: “John Hunter & the Tomb of the Scarab Queen is a thrilling new addition to our John Hunter series, which is a staple of our portfolio.

“We are always looking to develop exciting content, and the John Hunter games give us a great platform to develop a fascinating story with a great character.”