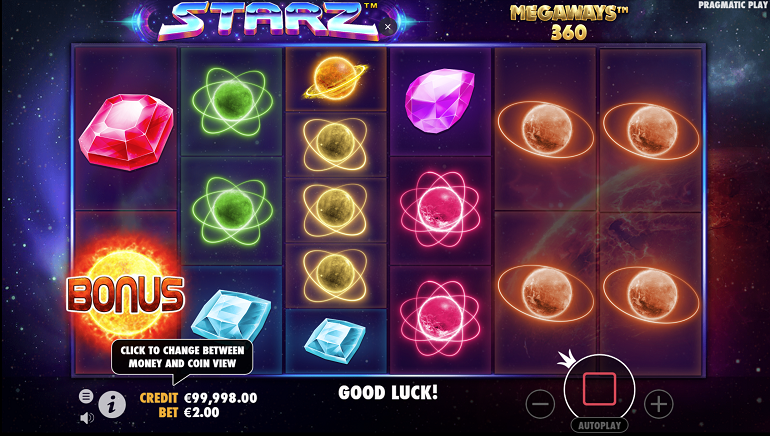 The latest game from Pragmatic Play features exciting base gameplay and thrilling bonus feature promising potential payouts up to 10,000 times the stake.

Pragmatic Play has released their latest product in the form of the brand-new Starz Megaways slot. The second game designed under the license from Big Time Gaming (following on the success of Great Rhino Megaways), Starz slot takes players on an exciting interstellar adventure filled with big wins.

Beyond the Final Frontier

The new slot from Pragmatic Play offers players an opportunity to explore the colorful world of deeps space filled with stars, planets, and valuable gems. The upbeat tune playing in the background adds to the atmosphere and helps set up the mood.

This is the second game from the Pragmatic workshop to feature trademarked Megaways technology. The game is set up on a 7x6 grid and offers up to 117,649 potential ways to win on any single spin. Wins pay both ways, from left to right and from right to left.

Like most Megaways slots, Starz is a game capable of producing seriously big wins. Symbols to look out for in the base game are 16-pointed stars that act as expanding wilds and sun symbols that help trigger the bonus feature.

Landing at least three sun symbols in the base game will start the bonus but not before a free re-spin during which more suns can land on the reels, increasing the number of free spins in the bonus. The minimum players can get is six spins for just three suns while the maximum is 15 spins for six bonus symbols.

While the bonus feature can't be re-triggered, it harnesses big potential as all wild symbols that land on any reel will expand to cover the entire reel and remain sticky for the duration of the bonus. The maximum payout that players can look forward from Starz Megaways is 10,000x the stake, so it's quite likely this game will attract some attention in the coming days and weeks.