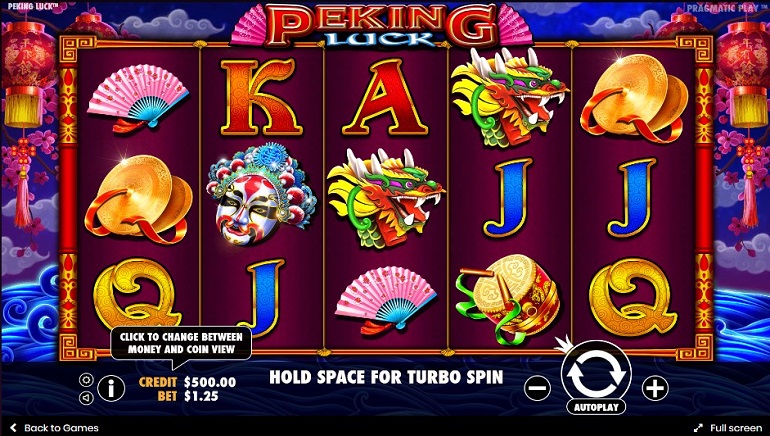 The Peking Luck slot features 25 paylines and just one bonus feature, but with a potential to reward up to 38 free spins with the maximum multiplier of 18x on all bonus wins.

Games based on folklore, tradition, and culture always seem to attract players, so with their latest release Pragmatic Play decided to tackle a theme that we don't get to see that often on the slot reels. The game, cleverly called Peking Luck, takes players inside a Chinese opera, offering fitting symbols and music, alongside big win multipliers.

A Stage Full of Colors

Reels of the Peking Luck slot are set against a colorful scene with traditional Chinese ornaments and blossom trees in the background, setting the tone for this intriguing game. Chinese opera music continuously plays in the background, creating a truly immersive atmosphere capable of pulling players inside the game.

On the reels, traditional Chinese symbols such as fans, drums, opera masks, dragons, and beautiful dancers are there to round up the experience. Nicely designed and animated when forming a win, these symbols come to life, creating a more dynamic gameplay.

Big Multipliers in the Bonus

The Peking Luck slot is a fairly straightforward game in terms of play, featuring 25 paylines across the standard 3x5 grid. The lady dancer symbol is wild, substituting for all other symbols except for free spins scatters (golden gongs) and multiplying all wins by two.

Landing three or more scatters triggers the bonus feature, where players will get to pick twice from several colorful fans. First time around, they'll pick to get the number of free spins, and on the second go, they'll determine the multiplier that will be active on all wins for the duration of the bonus.

The maximum number of free spins is 38 and the biggest available multiplier is 18x, so Peking Luck clearly has a decent potential for big wins. Wild symbols are also stacked on the reels, which creates even more possibilities.

All in all, Pragmatic Play's Peking Luck slot is a nicely designed and intriguing release likely to pick up some interest from the players. A traditional oriental setup and big win multipliers create a great combination to fire up one's imagination.