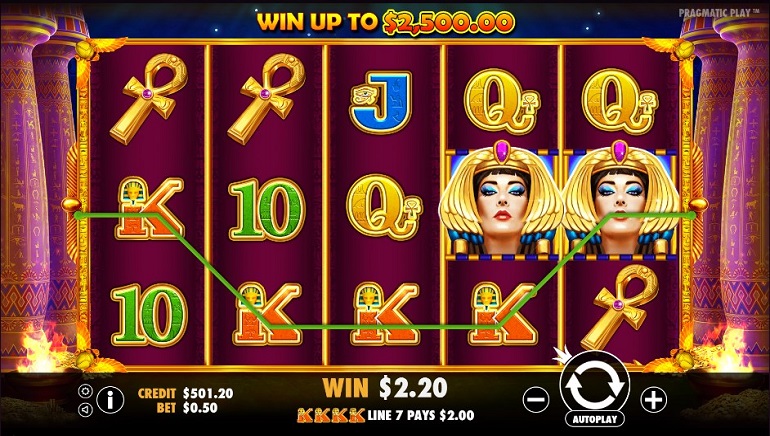 The latest slot game from Pragmatic Play takes spinners down the Nile to Ancient Egypt, where they will find treasure chests filled with free spins and cash awards.

The always-popular topic of ancient Egyptians is revisited in Pragmatic Play's latest slot game. Appropriately titled Ancient Egypt, the richly coloured reels spin up classic symbols such as the all-seeing eye, ankh, Anubis and a graceful Queen across 5 reels and 10 paylines.

Wild substitutions, free spins, expanding symbols and instant cash awards are just some of the treasures hidden within ancient Egypt.

Taking A Trip To Egyptian Riches

Flanked by decorative columns, covered in hieroglyphics and lit by animated fires from below, the royal palace is a stylish setting for the game to play out.

Along with the classically-styled picture icons, this slot has the traditional high-card symbols creating the lower value winning combinations, returning prizes when 3 or more of the same type stop on adjacent reels across a payline.

A golden beetle triggers some special features when it appears, substituting for others as a wild symbol if it is then able to complete extra lines, while doubling up as the scatter icon, launching a bonus game when seen in any 3 or more places at once.

Players choose from 3 treasure chests to be awarded either free spins, where a random symbol will expand across any reel it stops on, or they could receive a high value prize of between 10 to 500 times the triggering bet. There's also a consolation prize of 1x the stake hidden within a chest.

What Pragmatic Play Have To Say About Ancient Egypt

Pragmatic Play’s Chief Commercial Officer, Melissa Summerfield has said of the new game: “Ancient Egypt is a refreshing take on a popular theme, bolstering our reputation as one of the most adept casino game providers in iGaming.''

“In an intuitive design twist, the game features nine paying symbols rather than the traditional 12 or 14, with exceptional underlying maths making it an inviting treat for new players and long-time slots fans alike.”