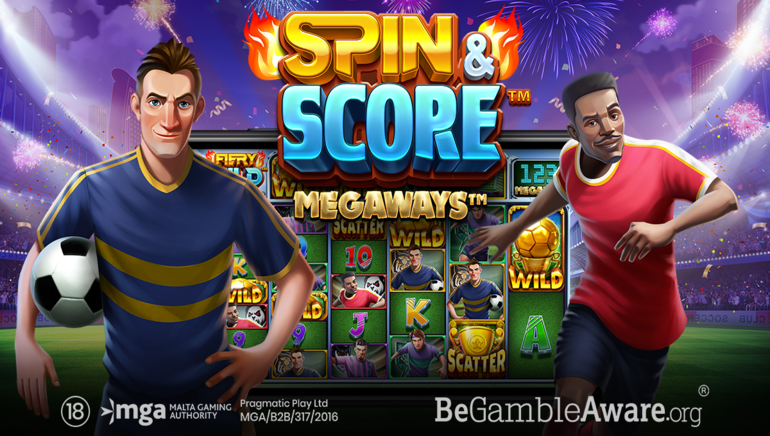 Pragmatic Play is one of the most prolific software developers, with up to seven new titles released monthly. Many of its new games are themed slots, so when punters spin the reels, they also feel like being part of something greater. The latest release is perfect for football fans who want to hit the back of the net with a high-paying slot that gets them in the mood for World Cup action.

Pragmatic Play has a reputation for developing eye candy slots with original mechanics and many winning ways. Spin & Score Megaways™ is a shining example, with six ever-changing reels and a massive 117,649 winning ways. The football theme is self-evident, as the symbols appearing across the reels depict football players.

The wild football is a powerful sign, as it can replace all the other symbols except the scatter. It also has the uncanny ability to transform the two reels below into wilds, increasing the number of winning combinations. The slot also has a tumble feature, which removes the winning symbols and replaces them with new ones.

A trophy depicts the scatter symbol, and you need a minimum of four of them to trigger the free spins. As many as 10 can be unlocked; when this happens, you can claim them or use the gambled feature to secure even more. During free spins, winnings are multiplied, and you can re-trigger the bonus rounds by discovering an additional three scatter symbols.

The Right Slot at the Right Time

Spin & Score Megaways™ was guaranteed to be a hit regardless of the time of its release due to the high number of winning ways and great RTP. However, Pragmatic Play hit the jackpot by unveiling the game just a few days before the start of the World Cup 2022. It follows in the footsteps of Release the Kraken 2™, Sword of Ares™, and Big Bass Keeping It Reel™, which were also big hits.

The football theme slot offers a massive number of winning ways and multipliers that pay large amounts during the free spins. The Megaways™ mechanic is at the cornerstone of its gameplay, but the gamble feature for free spins is also huge. Slots fans will be delighted to try this new, high-paying game but those who love football will be particularly excited by this new release.