Prepare for Adventure in Play'n GO's New Slot, Cat Wilde in the Eclipse of the Sun God 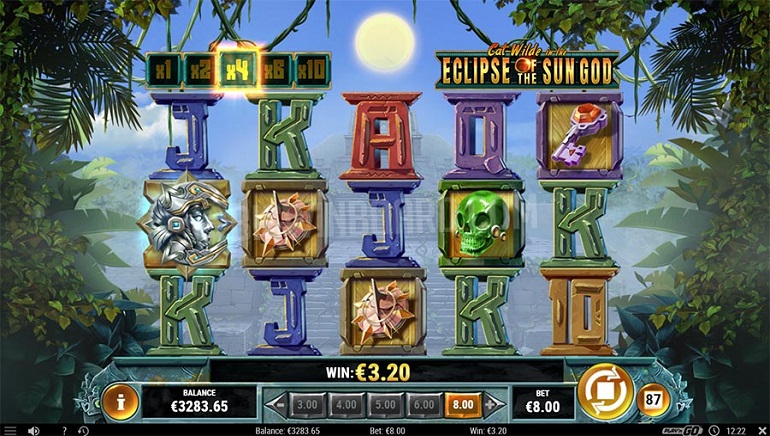 Play’n GO’s new slot, Cat Wilde in the Eclipse of the Sun God, is an adventure-filled game that includes cascading symbols with multipliers and a Free Spins round that can lead up a multiplier of x70.

Play’n GO’s new slot, Cat Wilde in the Eclipse of the Sun God, follows the daughter of the popular character, Rich Wilde, to Central Mexico. There she encounters the legend of the Aztec sun god and takes players along for the ride. Unsurprisingly, Play’n GO wows with its killer graphics and soundtrack to match. Features include cascading symbols with multipliers and a Free Spins round that can lead up a multiplier of x70. This is definitely a slot for players with an adventurous spirit.

Cat Wilde in the Eclipse of the Sun God can be played at Play’n GO casinos, online and on mobile.

Cat Wilde in the Eclipse of the Sun God is a 5x3 cascading slot with 20 fixed paylines. The game is highly volatile and can be played on all devices. Bets run between $.20 to $100 and the RTP is a solid 96.22%.

Symbols include 10-A royals and more theme-appropriate things like a sundial, key, skull, and Cat herself. There is also a Sun God wild that pays out 100x the bet for five in combination and a Moon Goddess scatter. Wins are scored when at least 3 symbols of a kind land adjacent, starting from the first reel.
Whenever a win is scored, the winning symbols are removed from the reels and new symbols cascade down. Every time this happens, the game’s multiplier increases. It can go up to x10.

During the Free Spins round, the scatter also acts as a wild. Collecting scatters can lead to more free spins and it can also increase the cascade multiplier. For 30 collected scatters, players can score a multiplier of x70.

Cat Wilde in the Eclipse of the Sun God builds on the popularity of Play’n GO’s Wilde family slot games. It also manages to hold its own with its cascades, multipliers, and scatters that are crucial for driving wins up in the Free Spins round. With stunning graphics, an engaging soundtrack, and a maximum win of 5500x the stake, Cat Wilde’s latest adventure is sure to intrigue players around the world.