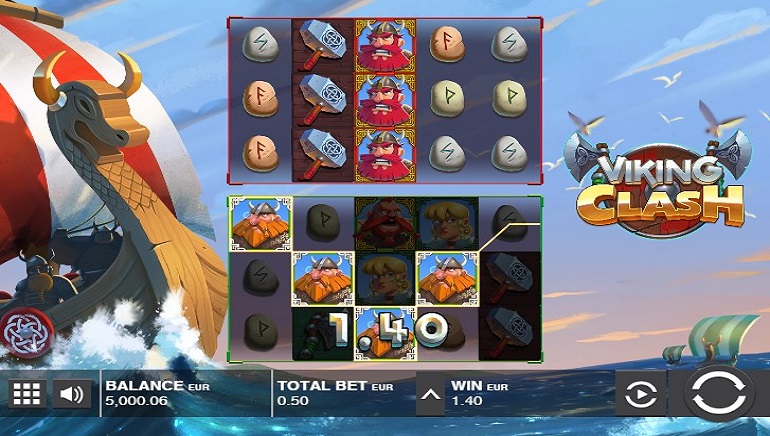 Push Gaming may be a relatively new developer but they have been very active with producing fresh titles in the recent period. The latest game to come out of their workshop is the Viking Clash slot, a game that takes players on an adventure across wild northern seas in their claim to fame and fortunes.

Two Set of Reels Instead of One

The first thing that can't be missed about Push Gaming's Viking Clash is that slot features two set of reels (Red & Green) instead of the usual one. Positioned one of top of the other, both sets look identical and the reels spin simultaneously, featuring 25 paylines each.

Everything is nicely wrapped with exciting and somewhat solemn soundtrack, which helps set the mood and emphasize the importance of this great journey.

Plenty of Features Hidden in the Waves

Special features are what make any slot entertaining and exciting and there are plenty of these to go around in Viking Clash. First of all, there is the Wild Ships feature, which will have high waves splash across the reels, bringing wild ship symbols onto one of the boards. This will trigger free re-spins, with ships moving to the left, producing wins. The feature ends once all ships have left the reels.

Landing three or more red catapult or green cannon scatter symbols anywhere on both set of reels triggers the Viking Battle free games feature. There will be extra wilds added to both set of reels, depending on the number of scatters, with the potential for multiplier wilds and unlimited free spins.

Although the Norse theme has often been used in online slots, Push Gaming managed to create a unique and original game that is likely to attract some attention from the players. The slot has an average RTP of 96.67% and can now be found at Push Gaming casinos.