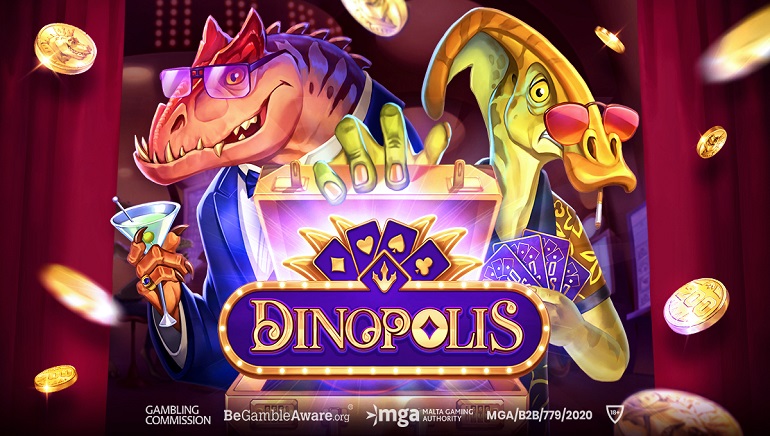 The new slot from Push Gaming features high volatility, interesting bonus features, and, most importantly, a potential to produce wins up to 50,000 times the stake.

What the world would be like had dinosaurs not become extinct? No one can say for sure, but Push Gaming seems to have a theory, and they've decided to share it with the world in their new Dinopolis slot. The game takes players inside a modern-day casino occupied by ancient lizards with human characteristics, setting up a funny and interesting story-line.

Push Gaming is sticking to its guns when it comes to design featuring cartoonish graphics and bright colors, as this approach has served them well in the past. The Dinopolis slot is full of color and animations, while reels are populated by dinosaurs wearing fancy suits and evening gowns.

These lizards are out to have some fun and the game makes that very clear right from the very first spin of the reels. Graphics and sounds alone will immediately grab the players' attention, and that's not even considering bonus features and the massive win potential this slot hides.

The provider is known for creating games featuring high volatility and huge potential wins and Dinopolis is no different. This is a very volatile game, but players can look forward to the maximum win of 50,000 times the base stake.

To be able to produce such wins, Dinopolis offers several entertaining features. First of all, there are Dino Coins that can land on reels 1 and 5, featuring wins up to the maximum of 1,000 times the stake.

Then, there are multiplier wilds that appear during the base game, boosting regular wins.

Of course, the biggest potential of the Dinopolis slot by Push Gaming is hidden in the bonus feature that's triggered by landing three scatters on the three middle reels. During the bonus, at least one special feature is active, but those lucky enough to find a Golden Card will get two extra picks, unleashing the full potential of this game.

With RTP of 96.40%, high volatility, great graphics, and, of course, potential for big wins, Dinopolis has all the prerequisites to become the next players' favorite. To top it all off, the game is fully optimized for mobile play and looks great on phone screens.