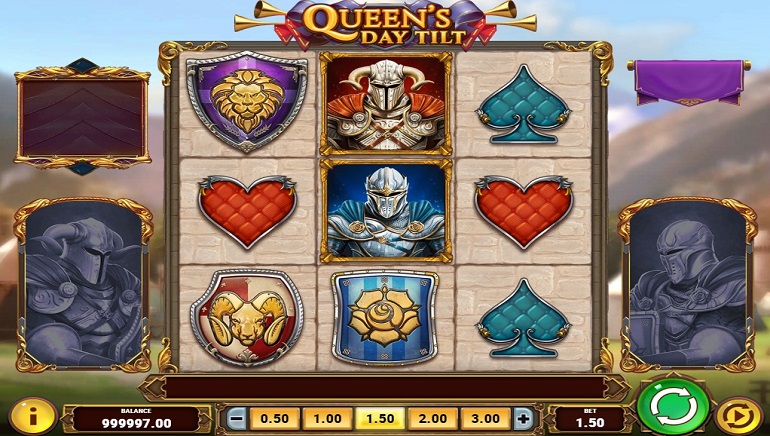 Legendary game maker, Play'N GO readies for the royal release of Queen's Day Tilt slot. This game plays out on a 3 x 3 grid with dueling warriors competing for generous payouts. Players can expect red carpet treatment from this trumped up adventure!

Queen’s Day Tilt is a majestic slice of adventure fit for a queen. This entertaining slot machine game is a glorious tribute to HRH, the Queen of the game.

Queen’s Day Tilt is the latest video slot game from renowned game maker, Play’N GO. Set in medieval times, Queen's Day Tilt plays out on a 3 x 3 grid featuring coats of arms, Knights and battle-hardened warriors. Players can wager a total of 10 coins as they joust for jackpot joy on a single pay line.

This captivating game is peppered with a host of regal symbols which slot into place to form winning combinations. Players can rack up winnings by forming combinations of at least 2+ symbols vertically, horizontally, or diagonally. Winning symbols can form in multiple combinations, adding to the allure of this slot game.

Wild symbols substitute for other symbols to form winning combinations in the game. When 3 identical symbols form, the wild may be the center symbol. However, if the wild is on either end of 3 identical symbols, it will be removed from the 3 x 3 grid. Queen’s Day Tilt also showcases The Ruler. This occurs only on non-winning spins. Queen’s Day ‘Tilt’ kicks in when just 1 symbol remains on the reels.

The Queen's Day element forms when there are no symbols on the grid. Players will be awarded 5 free spins (sans low-paying symbols). Any wins that accrue will multiply winnings by 2. On either end of this video slot game are two warriors clad in battle gear. Play’N GO has rolled out the red carpet for slots fans with Queen’s Day Tilt. The overall RTP (return to player) percentage is 96.36%.