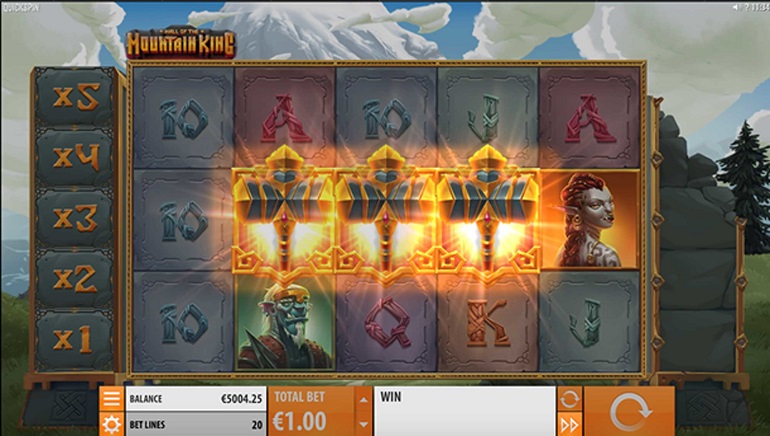 Enter the Hall of the Mountain King in an animated slot from Quickspin. The Troll King inhabits a lair lined with special features.

Hall of the Mountain King is going to be playable across Quickspin casinos and will introduce players to an animated setting that is filled with music and promised to intensify as the game advances. Another element of the slot is the king of trolls, who can use his hammer to adjust the landscape as he sees fit.

The Troll King has constructed the slot interface by using three rows and five reels. Meanwhile, the wagering spans from €0.20 to €100.00 and covers the backing of all 20 fixed paylines provided within the slot.

In the experience, there is a Multiplier Meter that applies an indicated multiplier for every win that is spun. The multipliers rise through 1x, 2x, 3x, 4x, and 5x, with the number of wild symbols deciding on the exact value. The Multiplier Meter can combine with the Stacked Wilds to result in even greater winnings being triggered.

Collecting three scatter symbols will lead to the unlocking of the free spins bonus game. If the player can win in the first two stages, then the Troll King will use his hammer to smash remove lower value symbols to replace them with higher value ones.

In stage two, the Troll King can smash the bottom block of the Multiplier Meter to upgrade the values in the entire list. At this point, the player gets to advance to the third and final stage where all Whirling Wilds shall start coming down in what is described as three intense free spins.