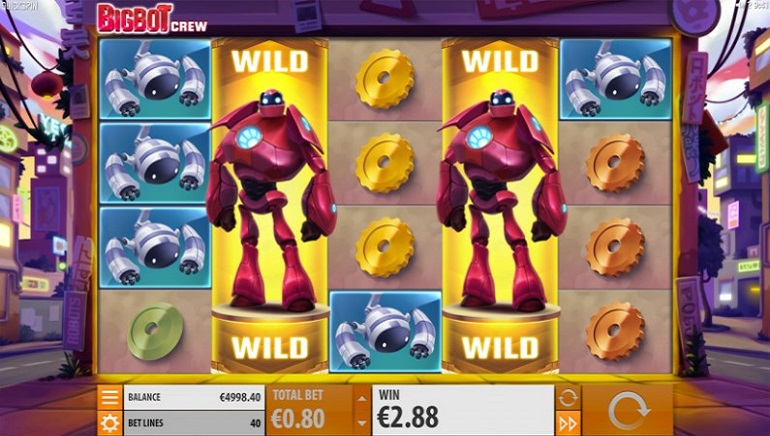 Swedish games developer Quickspin has announced the launch of Big Bot Crew, a slot themed around robots and AI that comes with features such as reel respins, free games and symbol nudges. With 5 reels and 40 lines, this desktop and mobile-compatible slot is a high volatility game that can pay out some big rewards.

A futuristic city can be seen behind the main game, and cartoon style symbols include colourful gears, a variety of robots and the humans who populate this metropolis. Fast-moving graphics and animations bring these characters to life in each spin.

The red BigBot is a wild icon who is stacked three symbols high. When he fills whole reels, 'Robetto Respins' are awarded, with the number of spins equal to how many reels the BigBot landed on. The wild robots stay in place throughout these extra spins. To help trigger this round, if BigBot is only partially in view after a spin, a mystery nudge could cause him to fill the whole reel.

A bonus symbol triggers up to 8 free spins when seen in 3 or more places at once. Any time the wild BigBot fills a reel, an extra free spin is added on.

Quckspin was founded in 2011 and in 2016, was acquired by Playtech. Their range of online and social casino games is fully licensed in multiple jurisdictions. Big Bot Crew is launched on September 11th and follows the successful release of other slots from Quickspin including Eastern Emeralds, Northern Sky and Dwarfs Gone Wild.

Quickspin CEO, Daniel Lindberg, says: “We’re delighted to unveil our exciting new AI- inspired slot, and are confident it will push all the right buttons for our players. The innovative features and symbols of the game reinforce our commitment to offering players a unique and premium gaming experience, as well as one that is aesthetically pleasing.”