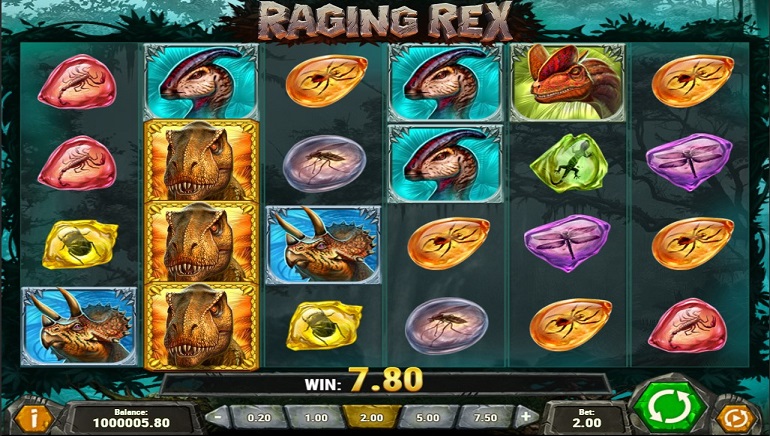 Dinosaur mania continues with the all-new Raging Rex slot from acclaimed game maker Play’n GO. The fearsome T-Rex stars in in a slot game with plenty of bite!

Our fascination with dinosaurs continues with the launch of Raging Rex slot. This bite-sized entree is served up with a menacing set of teeth and powerful jaws. The unmistakable Tyrannosaurus Rex makes a New Year's debut in a Jurassic-era slot game. Peppered with pachyderms, Triceratops, and prehistoric insects encapsulated in hardened tree sap and lava, this super-sized slot is guaranteed to ramp up the action for adventure seekers out there.

Raging Rex slot game is laced with features. It fuses the Jurassic era with modern technology in an edge-of-your-seat jungle adventure. Raging Rex showcases re-spins when T-Rex goes on a rampage and stomps across the spinning reels. There are 6 reels, 4 rows, and 4096 ways to win in this action-packed slot game. This blast from the past also features Raging Spins. When players land between 3 and 6 scatter symbols, they can win up to 30 free spins. While the raging spins feature is in play, 2, 3, 4, or 5 scatter symbols will add additional spins to the game.

Players are urged to be on their guard, especially during the Wild Hunt and Primal Rage stages. During the Wild Hunt, extra T-Rex symbols can form with multipliers up to X243, and during the Primal Rage feature, the Raging Rex will occupy a reel while the spins are in play. The scatter symbol is represented by the blazing meteor, and the wild is represented by T-Rex. 3+ scatter symbols activate raging spins and the T-Rex substitutes for other symbols except the scatter symbol to form winning combinations.

A Slot Game with Teeth

Players can win up to X5000 their bet with Raging Rex slot. The low-paying symbols include the insects and geckos trapped in hardened tree sap. These include dragonflies, scorpions, beetles, spiders, mosquitoes and geckos. With 4096 ways to win, players are in with a fighting chance against Raging Rex and his fearsome crew. This riveting slot game from Play’n GO is scheduled for a big debut on January 10, 2019. Player caution is advised when clicking the spin button – this game has teeth, and T-Rex is not afraid to use them!