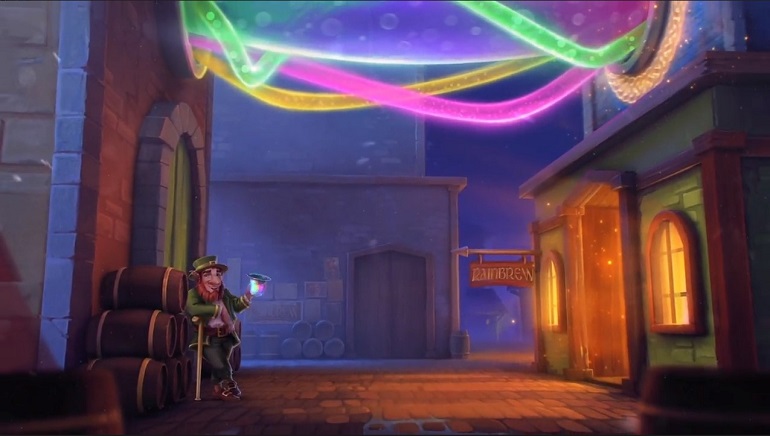 Rainbrew is the latest new slot from Just for the Win, a studio that maintains a development partnership with Microgaming casinos.

Microgaming has been known for releasing the Castle Builder slots from Rabcat, which is a smaller-scale developer compared to the aforementioned global software provider. In a more recent development partnership, Microgaming has also started to release slots from a studio called Just for the Win, headquartered in Sweden and established in 2016.

As a result, a number of Just for the Win slots have arrived at Microgaming casinos in 2017 and 2018, including the likes of Amazing Aztecs, Deco Diamonds, Goldwyn’s Fairies, Lucky Links, and Temple of Tut. Adding to that list is the launch of the Rainbrew slot, which has been exclusively released at Microgaming casinos, as of August 2018.

As the intro video rolls, it becomes apparent that Rainbrew takes place in the motion shop of a magical town populated by leprechauns and illuminated by rainbows. Meanwhile, a folk-style score serves as the audio accompaniment for a slot game that has been optimised for mobile screens.

At first, players will see that Rainbrew is a five-reel slot with three rows and 243 ways of winning. However, that can all change if the blue row at the top and/or the green row at the bottom of the interface are activated. Ultimately, this can lead to 1,125 ways of winning by matching the various Celtic symbols.

The additional rows are governed by the Sidewinder feature, which always remains active. One benefit of the feature is that there are three types of wild symbols that are linked to the feature and which can appear there to boost players’ chance of winning.

Another benefit is that Rainbrew free spins symbols can also appear in the top or bottom rows. Aiming to land those symbols on the second and fourth reels will bring about the ability to gain free spins by connecting with the additional rows.