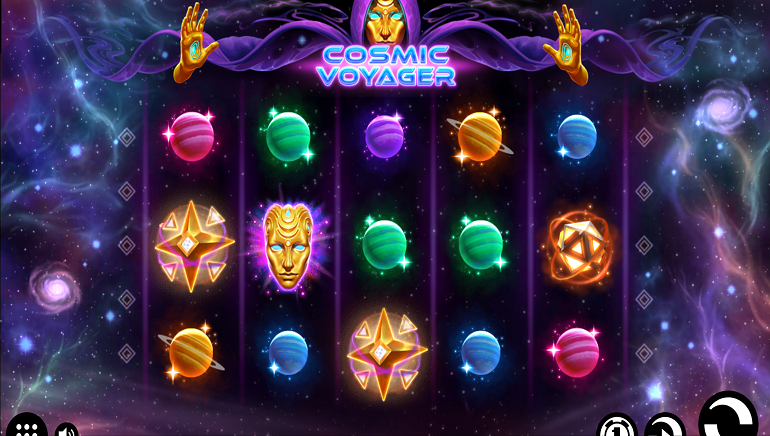 The Cosmic Voyager online slot is new from Thunderkick. It's a game that mixes magic, mysticism, and sci-fi across 5 reels and 10 paylines, and where players can unlock expanding symbols, wild substitutions, and free spins.

Open Your Mind To The Cosmic Voyager

The reels float in deep space, surrounded by stars and swirling galaxies. A wizard-type character, with glowing eyes under his gold mask, has his hands outstretched across the top of the game, while symbols on the reels include planets, futuristic pyramids, cubes, and more golden masks. The other-worldly style looks good across desktop and mobile versions of the Cosmic Voyager slot. It sounds good as well, with a haunting electronic tune playing out as the reels spin.

Players who land a stack of the same symbol on the left-side reel will trigger an expanding symbols feature. Any examples of the same type on the other reels will expand up or down if they can then create wins.

Look out for the game logo, as this is both the wild symbol, which can act as others to complete combinations, and a scatter symbol that triggers a free spins round when seen in any 3 or more places.

During the free games feature, just a single example of a mid, or high-value symbol on reel 1 is enough to trigger the expansions, making it easier to claim a big win from the Cosmic Voyager slot. More scatter symbols will retrigger the free games with no upper limit to how many times this can happen.

The bet level runs from 0.10 to 100.00 per spin, and this is a high volatility game, where the average return to players percentage is 96.14%. It's possible to win 5,000x the total bet on a single spin of the reels. Cosmic Voyager is available now at desktop and mobile sites featuring the Thunderkick range.