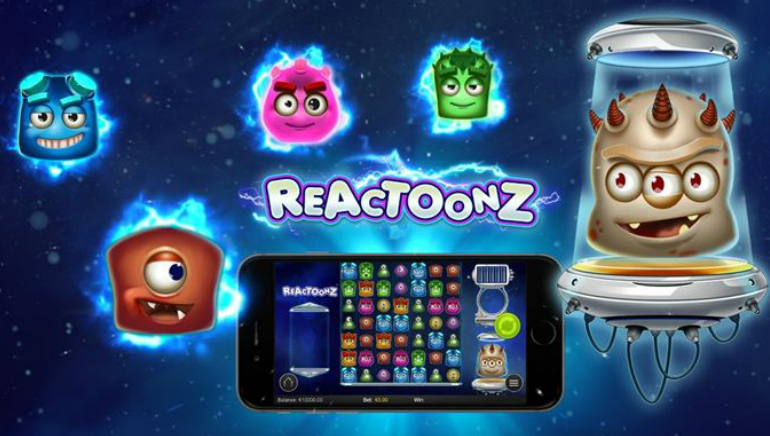 There's a new alien-themed game from Play'n GO released on October 24th. Reactoonz plays out on a 7 x 7 grid and has lots of in-game bonus rounds.

On October 24th, Scandinavian casino games developer Play'n GO added the alien-themed Reactoonz to their portfolio. It's a sequel of sorts to their big hitting Energoonz and comes with colourful symbols laid out on a 7 x 7 grid and a wide range of features that are sure to make it as popular as the original.

We took time out to enjoy the intergalactic action and see if Reactoonz is a worthy successor.

With a wide bet range that starts at just 0.20, it's a game to suit most budgets, although it doesn't have conventional paylines. Instead, each spin sees a new set of symbols cascade down to fill the grid and players win whenever 5 or more of the same symbol type land in clusters, or lines.

One of the main attractions of this game is the way that symbols which are part of a winning combination will explode, which leaves space for any above to drop down into. This can often create another winning cluster, which repeats the whole process, while any cascade that sees 25 or more symbols disappearing will also start to fill up any of the 5 Quantum Leap charge meters.

These trigger some potentially rewarding bonus rounds. In the Implosion feature, up to 6 random symbols turn into wilds, while the Alteration feature sees a lower value alien turning into any other to improve the chance of getting a cluster.

With the Demotion feature, all 4 lower-value aliens are removed, and last but not least, there's Wild Incisions, where a wild symbol turns all diagonals into examples of the same alien.

A Gargantoon wild symbol will turn up once the Quantum Leap meters are all filled, and when this happens, big blocks of wilds are seen in each sequential cascade, or players could see to 8 wilds added after a non-winning spin.

We found this to be a fun, fast-paced game where lots of lower-value wins appeared and the features were frequently triggered.