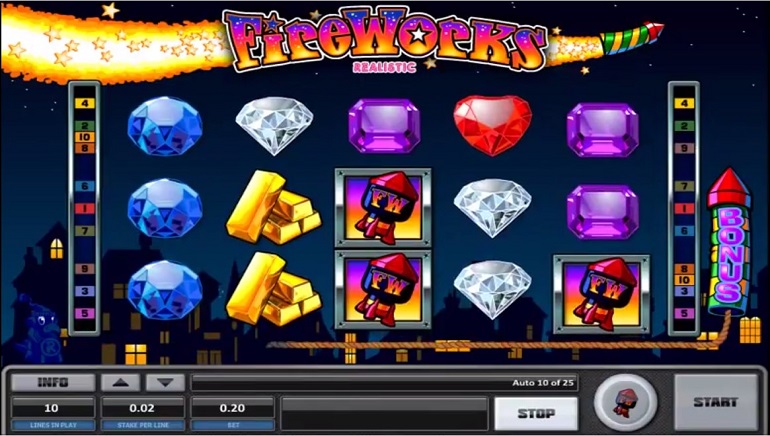 Light up the night sky with large fireworks from the five-reel slot and its unique features from Realistic.

British online casino games developer Realistic Games has launched its latest creation and it comes with an explosive theme and flashy features. Fireworks is a 5-reel slot machine which can be played in full screen, making it the first of its kind from the provider and has already went live at leading websites on the platform, such as bet365 Casino and Ladbrokes Casino.

The theme of the game has some classic elements as the action takes place on three rows of symbols and five reels. Players can select up to 10 lines for each spin and combinations can be made from left to right, from right to left and even on the center three rollers. Three matching symbols on adjacent reels on an active line will form a payout. The biggest payout is for 5,000 times the line bet.

A special feature found in the slot is called Firework and it is represented by the large firework shown on the right of the screen, with its fuse being located under the reels. On each spin, the fuse is lit and it advances based on the symbols on each roller. If all the symbols on the above reel are the same, the fuse remains lit and gets closer to the firework.

When the fuse is all burned out and reaches the explosive rocket, a small bonus game will begin. The flashing button will become available and players must click it to randomly select a reel to make it sticky for a re-spin with more of that symbol.

An exciting sense of anticipation

Fireworks can be very exciting to play due to its features as every spin has several ways of generating a nice payout. The Realistic commercial director has called it the best game ever made by the company and the fact that it is in full screen makes the experience even more immersive.

How has Apple's dominant place in the mobile phone market affected the development of iGaming?

Get Ready for Some Raging Kitties in Play'n GO's New Slot, Feline Fury

Dutch Luck Puts Online Gaming on the Backburner in the Netherlands

US Election Odds: Joe Biden With The Lead