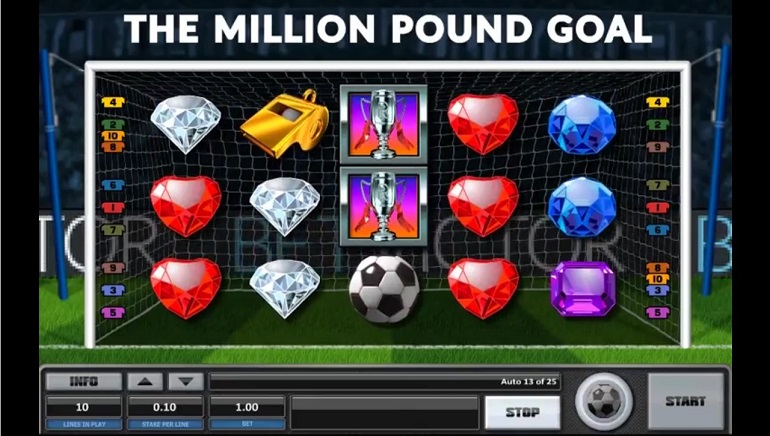 The Million Pound Goal is a brand new slot game that has been released at BetVictor in time for Euro 2016.

Euro 2016 is a little over a week away and teams have named their final squads for the competition. With time rapidly ticking away, sports betting sites are launching new games and special events to celebrate the occasion. The latest development is the release of Realistic Game’s Million Pound Goal Slot.

By design, the Million Pound Goal is designed to excel on laptops, tablets, and smartphones alike. When wagering on the five-reel slot, players will not be overwhelmed by its affordable 10-payline structure. The core gameplay is designed for players to match three or more symbols on the fixed paylines.

The Million Pound Goal slot has a feature where a matching stack of the same symbol will cause the reels to flash. When the flashing is over, up to three symbols from the other reels will have transformed to match the stacked symbols.

At the start of June, BetVictor announced it would be working with Realistic Games on the igaming software developer’s latest slot release, which is entitled the Million Pound Goal. And, true to the name, BetVictor has planned a special competition that will let players compete for £1 million.

This event will be a welcome challenge for the entrants who really know their football. This is because the overall winner will be the entrant who manages to predict the correct scorer of the first goal and the closest time to when it happened. If there is a draw, the £1 million prize fund will be shared.

Slots From Realistic Games To Be Rolled Out Across 888 Casino