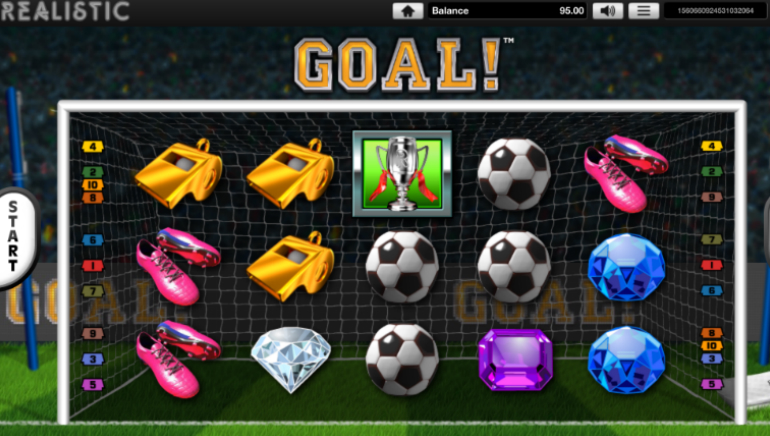 Goal is a new slot game released by Realistic Gaming, an experienced, UK based software designer for the online casino industry.

Realistic Games, one of the most experienced, award-winning software designers in the online gambling industry has released its newest slot games called Goal. The football themed game will certainly be appealing to sports fans and slots fans alike, with its fun, flawless graphics and interesting gameplay.

Hours of Fun on Any Device

Goal is designed to work equally well on all devices including desktops, tablets and smartphones. The game boasts a five reel ten line structure with just about all elements and symbols relating to football in some way. Players will certainly enjoy the highly interactive features like the bonus round which is awarded when all reels contain three identical symbols from top to bottom. Once there players can simply press the flashing football symbol and randomly select a reel during the bonus. The player gets a chance for a full house as all reels that didn’t contain the selected symbol will re-spin.

Realistic Gaming developed Goal in Flash and HTML5 allowing a huge degree of flexibility when it comes to user experience and devices. The release is expected to offer something for sports betting and gambling fans alike, particularly with the new football season debuting this month in numerous European countries.

Andy Harris, Realistic Gaming CEO declared that football themes have a “universal appeal” as long as they are well designed and boast a “good math’s model”. Goal can be found in a number of Realistic Gaming powered casinos such as bet365 Casino, BetVictor Casino or LeoVegas Casino.

The British based developers operate from Reading, Berkshire and have made a name for themselves as one of the best high-quality suppliers of gaming content in the world. With an experience that stretches over four decades in land-based and online casino games, Realistic Gaming products are some of the most appreciated by casino operators.