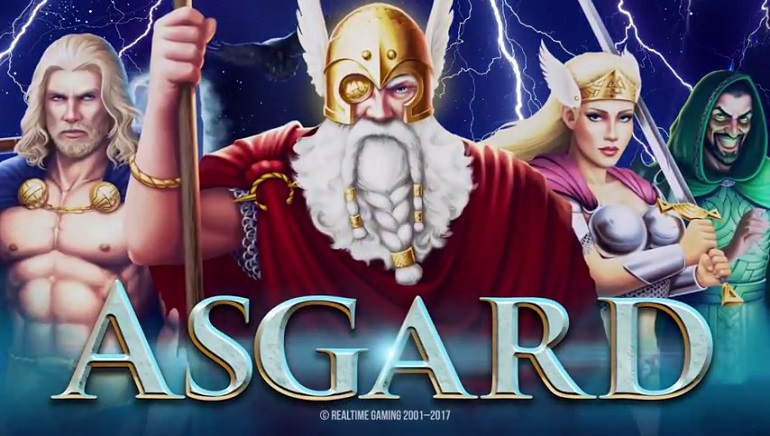 Asgard is a new slot machine from Realtime Gaming that follows the adventures of Thor, Loki and Odin, awarding players with new bonus features as they unlock free spins games.

With the latest Thor film still drawing in the crowds, it's the ideal time for a new slot game based on the characters to be released, and Realtime Gaming (RTG), have recently launched the Asgard slot at sites such as Slotastic Online Casino.

Hammering Out The Details

Although it isn't related to the movie, players will recognise characters like the mischievous Loki, Odin and of course, Thor himself, all accompanied the famous hammer, the floating realm of Asgard, plus high card symbols across the 5 reels, where a 243 Ways to Win format is in effect.

A golden wild symbol not only helps to complete winlines when it substitutes for others, but also doubles the base value when it does so, while a randomly-triggered Thunderbolt feature can turn any number of reels fully wild at the end of any spin.

Unlocking A Series Of Bonuses

A series of different free spins games are triggered by any 3 or more Bonus symbols. On the first occasion a player lands them, they enter the Goddess round which has all free spins wins tripled, but the fifth time that a player triggers the bonus games, they will enter the Loki's Magic round, where they get 20 spins with a wild middle reel and extra wilds at random.

On the tenth triggering of bonus games, Thor oversees the Thunder God games, with 25 spins and wild multipliers of up to 6x the base value, while on the fifteenth occasion, players enter the Valhalla feature, where Odin grants 30 spins, and symbols can morph into others, adding multipliers as the reels fill up with more and more of the same type.

The Casino Manager at Slotastic has said of the new arrival: ''Asgard will really capture the imagination of our players, and especially those that love the thrills and spills of fantasy movies.''

''The gameplay is superb, and it just gets better and better for our players as we're offering some fantastic introductory offers.''